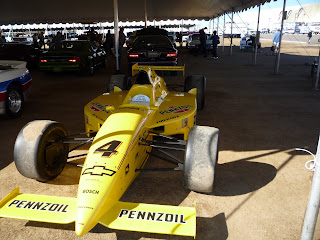 While the majority of the Indy Car teams are hightailing it back to their respective race shops after having just visited Homestead, and hopefully won’t suffer any Hi-jinx’s on there way back... I thought I’d take a moment and ramble on ‘bout a few Old IRL mounts that recently crossed the block at Barret Jackson this past January. As Miguel and I (mostly me) were rubber neckin’ over the few ‘Ol Timers IRL chassis on the West world grounds, I couldn’t discern any lot numbers or any other identifying features towards the history of these racecars. Since my trek to the Valley of the Sun, I’ve received my ’09 Barrett-Jackson catalog from AZ Bureau Chief Mary Jane, which ironically did NOT shed any clues upon the un-numbered Indy Cars up for sale either... Yet, fortunately she also grabbed a supplementary brochure titled The GM Offering which basically listed all of General Motor’s Heritage Collection offerings up for grabs and finally provided me with the clues towards the unknown Indy Car offerings, which I’ve been pestering Jeff about, since I’m not an Indy Racing League aficionado... Having been a CART/Champ Car guy instead and thus I know very little about the 1996-2007 era of Tony George’s Open Wheel circus...(Other then I’ll always think of that ominous era as the This is your Brain: CART vs. This is your Brain on Ovals: IRL!” as one feverish CART supporter’s T-Shirt proclaimed.)

Racing cars at Barrett Jackson
Lot No. # Team Engine Sponsor Description
1357 4 Panther Racing Chevrolet Pennzoil IRL Show Car*
1586 4 Panther Racing Chevrolet Pennzoil IRL Show Car
1588 - Unknown Oldsmobile Aurora None IRL Cut-away Car
1604 5 Unknown Oldsmobile Aurora None IRL Cut-away Car
1607 8 Cadillac Cadillac Northstar --- ALMS LMP1 Race Car
(* = Post 9/11 w/American Flag on engine cowling)
And here’s what Jeff of My Name is IRL had to say... (Lot#) “1604 Sunday Oldsmobile/Aurora IRL Cut-away car: $38,500. Holy smokes, I think this was Arie Luyendyk's Indy winner from '97. Possibly a different car from that year though.” Thanks for the help Jeff; as “Now its all clear as mud on a rainy day!” As the Chevy-esqe theme makes sense as all of the Chevy race cars were part of the GM Heritage Collection as noted above. And if any of you IRL soothsayers wish to chime in upon the aforementioned Indy Car chassis, please feel free to leave a comment...

Aye Karumba! As I sure don’t know what makes up the difference in prices between two equal looking show cars/cut-away chassis...

Hmm? Wonder if any of these were snapped up by any Indy Racing League teams as spare part mules? Or even better yet, conversion for this years upcoming Spectali? Nah, I doubt it...

Now back to the weather channel, eh? Where I hear it’s a toasty 80 degrees Fahrenheit in the Valley of the Sun, where some dude name Tiger’s hangin’ out this week...
Posted by Tomaso at 10:29 AM