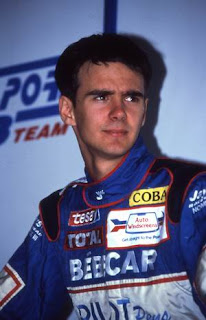 While in Indianapolis Danny B introduced me to a little ‘ol radio show held weekly. This webcast is held live Tuesday evenings (7PM Eastern) and airs for 1 hour via the internets on Autosport Radio.

The program is hosted by don Kay live from McGilvery's Speedway, a local bar & restaurant nearby the Brickyard. The week that I visited the show was quite entertaining with DM being quite funny… Along with Roger Bailey, whom I believe was once the captain of Indy Lights.

You know the series that used to be the final stepping stone prior to graduating into CART. Interestingly I think I heard over the din of the crowd that Mr. Bailey is now involved in the Indy Pro Series.

Of course I was off by one week towards being in the audience for the show. As I would have definitely made plans to attend seeing two multi Indy 500 champions at once. As the two guests were none other than Big Al and Lone Star JR. Otherwise known as Al Unser Sr and Johnny Rutherford whom have a total of seven victories at the Brickyard combined! And I don’t know the history between Donald K. and the two guests. But Big Al was a total crack-up, causing me to go into hysteric laughing fits. As he made quips about Johnny being late because he’d needed to take a pee break while driving the pace car for five hours in the rain at Michigan…

And it’s pretty hilarious to drop in live pre-broadcast and be able to hear everybody getting’ their game faces on before Mr. Kay starts the show. So if you’re interested in a local Indianapolis perspective on the world of Open Wheel Racing then check out Autosport Radio this Tuesday…
Posted by Tomaso at 8:55 AM