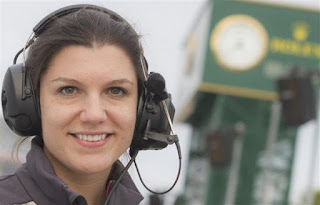 Whilst Queen Danica's looking for somebody to sponsor her Taxicab, Thy Leggy Juan' was busy at work poundin' the High Banks 'O Day-Toner'

Typically I celebrate Valentine's Day by posting my Ode to DannaCar', but this year I'm honouring Katherine Legge instead, especially after just hearing another typically witty, enjoyable and Groovy interview of her with The Speed Freaks following her final stint in this year's Rolex 24, piloting the #93 Michael Shank Racing (MSR) GTD (Daytona) class Acura NSX GT3, which was making its competition debut.

As it's over eleven years now since I saw Katherine race for the first time in thee Champ Car World Series (CCWS) at Portland International Raceway, where I subsequently stood in line Friday afternoon to get her autograph, along with the other Champ Car drivers.

As the nice lady ahead of me said she was their solely to meet Katherine and get her autograph, since Legge was CCWS's answer vs. Queen Danica who was A-L-L the rage at the time in TG's rival Indy Racing League.

As Legge was embarking upon her rookie season in the B-I-G' CARZ aboard Craig Pollock, Kevin "Smiley Face" Kalkoven and "Top Jimmy's" (Vasser) No. 20 PKV Racing's Lola/Cosworth, before being moved "Sideways" to Dale Coyne Racing for the final Champ Car season in '07.

With the Mergification of IndyCar, Legge found herself without a ride and migrated abroad to contest the Deutsche Tourenwagen Masters (DTM) series for Audi for three seasons, (2008-10) before returning Stateside.

For 2012 Katherine joined Jay Pissenbootz' Penske's Dragon Racing, bringing Truecar sponsorship in their touted "Empowering Women" sponsorship campaign, in what can only be called a most trying experience for the affable Brit, before Jay pulled a fast one upon her!

Yet in typical Femme Fatale fashion, Katherine picked up the pieces and joined Don Panoz's Gang and raced the provocative Delta Wing Prototype Sports Car for 2014-15, along with contesting one season of Formula E for Amlin Aguri.

Last year, Legge was inked to be the chauffer of Grace Autosports all female IndyCar squad for the 100th Running, but the team failed to participate in that year's Indy 500 before joining MSR this year as part of its two car Acura NSX lineup.

As leave I-T to Thy Leggy Juan' to teach us a Wee bit 'O British Humour; Err Slang in this most enjoyable Speed Freaks interview...

While those of you wishing to read my Oh, So clever Yearly Valentine's Day poem honouring Danica Patrick on this most momentous day 'O days can check I-T out by visiting what I posted last year on No Fenders.

As Good Luck to Katherine & her Studly Co-driver Andy Lally in the #93 this season in the Weathertech SportsCar Championship...
Posted by Tomaso at 9:24 AM