The vehicle pictured above may/may not still be on display. As these pictures were taken during last Summer; August, 2016...

KEY*
The engines above are the three most utilized in the chassis used during filming the TV Show and do NOT represent the Charger's entire range, which base engines were a 225-Cid )3.7-litre)  inline-six-cylinder and the 318 V-8. Also, a 426 big-block HEMI V-8 was optional, along with other V-8 choices. (Cid = Cubic Inch Displacement)

The Dodge Charger was introduced in 1966 with its two door Fastback body style designed to notch it's place in the fast exploding Pony Cars War, against the likes of Ford's Mustang and Chevrolet's Camaro, the market segment's leaders.

As the Charger's nameplate has been used on three primary body style versions, along with other foreign versions, and remains in production today as a four-door model.

The second generation Charger debuted for the 1968 model year, running thru 1970, while the Charger also competed in NASCAR, albeit not successfully vs. the more "Slippy" Ford Torino's, specifically the Superspeedway Torino Talladega model.

As Ford dominated the 1960's era during it's "Total Performance" period. Beginning with the Fairlane, the predecessor of the later Torino models,
as the Ford Motor Company ultimately won the NASCAR Championship six of the decade's  ten years.

And while Dodge countered Ford with its Charger 500 variant, the continuous push of Slipstreaming, or Aerodynamic gains for top speed in Stock Car racing ultimately led to the creation of the most evocative Charger ever, better known as the Dodge Charger Daytona - along with its Plymouth cousin, the Superbird!

Naturally, with RASSCAR's roots in Moonshine Running and the South, it's easy to see how the Charger was the Dukes 'O Hazzard's preferred vehicle choice. As both Bo & Luke Duke had to climb thru the windows a la RASSCAR' since the General Lee's doors were welded shut along with sporting the No. 01 upon them.

The 318-Cid V-8 Chargers were favoured for the two-wheeled driving stunts due to its lighter weight, while reportedly Stunt Drivers preferred the extra "OOMPH!" That the 440-Cid V-8's increased horsepower provided  for the long jumps performed. And contrary to popular belief, the majority of the 1968-70 Chargers utilized for the show were the floor mounted automatic transmission versions. 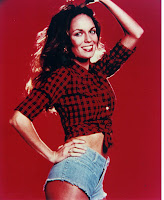 Funny now to think I grew up watching and laughing weekly to the Hit TV Show The Dukes of Hazzard, which aired on CBS for seven seasons between January, 1979 to February, 1985.

As surely Y'all remember those fun loving Duke boys, Bo & Luke, played by John Schneider and Tom Wopat respectively. While how could you not like Daisy Duke played by Catherine Bach, especially in her short-short cut off jeans; YOWSA!

As these three main characters resided with and were influenced by "Uncle Jesse," played by Denver Pyle.

Yet one of the show's main stars was undoubtedly the General Lee, who's horn played the first twelve notes 'O Dixie - and was guaranteed to be featured at least jumping away from capture once per episode during multiple police chase scenes; YEEEEEEEEEEEEEEEEEEEEEEEE-HAW!

As reportedly during the filming of the show's seven seasons, approximately 309 Chargers were used - with between one to two vehicles being destroyed per episode!

Yet these days, when I think of anything Dukes 'O Hazzard related, my mind wanders off to the original John Schneider, aka Bo Duke and NOT the Seattle Seahawks GM with the same name! Singing on the roof of his ex-Boss General Lee going under the Hammer at a past Barrett-Jackson auction, on the defunct SPEED channel.

As here's a popular rendition of the show's theme song, which Y'all can sing along to with Waylon Jennings...