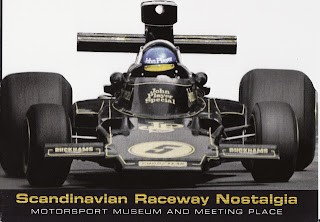 Just before I left for my sojourn in Arizona, I received the very kOOL Scandinavian Raceways F1 Nostalgia pamphlet I’d left by accident at the museum in the mail – Thanks to Tanja for getting another and then mailing it all the way from Vaxjo, Sweden to Mwah... And thus, I thought I’d drop “Ticko” a line and see how it went. So you can imagine my surprise when visiting The Race Legends website, I discovered the event had been postponed until 2011 due to economic concerns...

The Race Legends AB retagsrekonstruktion
The company has for the last two months been working intensively to solve the economic situation due to the cancelled and postponed event in Anderstorp. In order to ensure its survival, it was decided in the Stockholm City Court September 7, 2010, upon application by the company’s principals, to put the company in reorganization. This means that all who have demands on the company, both businesses and individuals, will be contacted by a designated administrator shortly. The main focus of the reorganization is that the company will survive and be able to operate properly.
Source: The Race Legends

So perhaps I’ll haveda run off to Anderstorp next May? Uhm? Oh yeah that’s right, I think there’s some little racin’ thingy going on at The Brickyard then, eh?

You can check out my Scandinavian Raceways F1 Nostalgia Museum & Race Legends stories in: