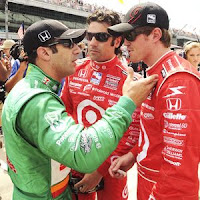 Now that the IZOD Indy Car Series season is over, and ALL of my channeling, along with a healthy dose of No Fenders Feel Good MoJo heaped upon the “Toowoomba Toranadoe,” nee Will Power, which as Y’all know didn’t do the trick – SHEISA! It seemed like the opportune moment to scribble away some thoughts about the current cast ‘O IndyCarz, eh? Especially with the ‘Predicament TK “Follow your Schnoz” Kanaan currently finds himself in: Can Y’all say Free Agent?

What Should Tony Kanaan do?

As mentioned before, I haven’t got ‘Juan DAMN thingy against Dario “REO Speedwagon” Franchitti, as Clyde asked me whilst in Tacoma over the Homestead weekend; I thought you liked Dario? As I’d rooted for him in years past, but lost a bit ‘O respect for the Flying Scot when I felt he threw his Pit crew underneath the proverbial ‘Bus.

Yet, as I’m guessing most of Yuhs know... I am most happy to see ALMOST anybody win in Indy Cars these days, apart from the two drivers I DESPISE the MOST + a third driver who I DON’T wanna see in victory lane because of his Primary sponsor... As I felt it the “Right-time” to mention this after previously reading ‘Geo Phillips piece about NOT liking Sam ‘I AM Hornish Jr. Who I’ve only rooted for in two different situations; otherwise he’s always sorta bothered me and I cannot say I’ve ever been a huge fan ‘O his...

The first time I took a Shine On to the ‘Hornster was way back in the Dark Dayzes of what many refer to as The Split! As this is the first time I can recall paying any attention to the Indy Racing League beside during the Month of May... As I was absolutely pulling 100% for Mr. Hornish to win the Championship for the “LowBuck” Panther IRL Team (Circa ’02) OVER then newly anointed DEFECTOR Penske from CART... With the second time only being pleased to see him defeat “Marky Marc” (Marco Andretti) at The Brickyard – Hey! After all, he’s an Andretti; YIKES!

Thus the only two drivers I currently DESPISE with great SCURGE is a former Dancin’ FOOL and somebody Y’all know as Princess... Who I’ve taken a liking to calling DannaWho? While I’ve kept my thoughts upon DannyBoy ‘SPIKE Wheldon’s primary sponsor’s presence in the IRL to myself; Kapishe?

Thus the news about Tony Kanaan’s Primary Sponsor 7 Eleven leaving Indy Car in 2011 was a minor surprise, as after all, at least AA Team Owner “Mikey” (Michael Andretti) has previously confessed how keeping sponsors in 2010 ‘N Onwards was gonna be challenging... Hmm? Perhaps he knew of this outcome along with IZOD’s departure?

As Y’all gotta feel a Wee Bit for TK, who seems to be following in the footsteps of somebody named The Chrome Horn, eh? After all, Paul Tracy stayed loyal not only to CART/Champ Car – but Team Owner Gerald Forsythe... And look where it got him! As The Schnoz turned down the ‘Cheepster’s offer in August, 2008 (for whatever reason; could it have been Moohlah?) And re-signed with Andretti Green Racing for a further 5-years, when he coulda taken Wheldon’s TCGR seat instead; which as we all now know Dario’s taken full advantage of!

Thus I’ll Speculate a little, with hopes of THE ‘DAWG NOT accusin’ Mwah of Speakin’ outta his Tailpipe; CRIKEYS! As where can TK go now? As I’ve already read ‘Juan pundit’s thoughts upon a second Panther Racing seat being his best option... OH FUCK! Just as long as that DOESN’T include any whoring for the Nat’l Guard! (Leave it to DannyBoy please!)

While it’d be a Coup for Team England, nee Dryer & Reinbold to add him to their fold, as Justin ‘BIG UNIT Wilson and Mike Conway could reap his considerable Oval track prowess, eh? While the only other Squad I could see benefitting from Kanaan’s Talent – Whale they all could benefit, Err willing to step up to the plate is De Ferran Dragon Racing, with a Darkhorse opportunity being a Satellite Team of TK and Adam Carroll at AFS Racing. Although I hear that Dale Coyne might be looking for a replacement for his No. 18 Racecar? And CITGO could surely pick up Kanaan’s hefty retainer, right?

Yet You’d haveda say that Tony Kanaan’s one of the “Good Guys” in Open wheel Racing and definitely deserves another good opportunity in the eve of his IndyCar career; sorta like Paul Tracy does! As I just hope TK doesn’t get the Oriel Servia shuffle; Aye Karumba! Yet I feel pretty certain that Kanaan will return to IndyCar in 2011 after listening to The Kevin ‘N Cavin Show recently.

And while trying to stay loyal to my MAN ‘THE BIG UNIT, nee Justin Wilson, I haveda admit I’m quite enamoured by Will Power...

Power has already WON!
Posted by Tomaso at 12:43 PM