Scooting down the Corkscrew 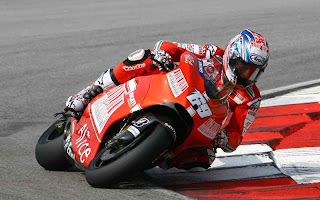 Otay, so this is slightly dated, since it was sitting in my queue ‘O Memorex viewing while cavorting about the Northwest sans Confuzer the first few weeks of July…

As it’s definitely the first time I’ve ever gotten to watch a “Live” MOTO GP “Qualie” session, which was airing late night (7/04) on SPEED; which I can only imagine what it’s like watching these Mad-men rocketing thru the Corkscrew live, knee touching the Tarmac as they hurtle past “Zanardi Corner…”

And these are truly High Technology works of art, as for example Ducati currently utilizes a Carbon fibre rear swing arm design, while these 800cc Four stroke ultimate “Pocket Rockets” weigh a mere 327lbs and exude 220bhp; giving a staggering horsepower to weight ratio of 1bhp:1.5lbs, while equipped with a dizzying amount of “Electric’s” which would make a Formula 1 Piloto jealous – state of the art traction, wheelie and launch control to name a few items.

And according to SPEED’s Greg White, these machismo leather clad warriors are now utilizing elbow pads similar to the knee pads they use to “touch” the Tarmac with both their arms and knees while experiencing “Lean” angles of up to sixty degrees, with a rubber tyre contact patch surface area totaling the volume of a size 10 men’s tennis shoe!

And the hour long session was extremely intense, as two thirds of Row 1 would end up crashing in the dying moments of qualifying, as eventual Pole sitter George Lorenzo crashed harmlessly before making his way back to the pits to go out on his “Back-up Scooter” with the softer of the two available Bridgestone compounds mounted. Yet next ’07 Champion Casey Stoner would go deposit his Ducatti into the gravel traps, sustaining a bruised hip, while with mere minutes left, Lorenzo would crash his second Yamaha; this time incurring a partially separated shoulder and sore ankle and was carted to the infield medical center via ambulance; leaving Fiat-Yamaha teammate and reigning World Champion Valentino rossi the opportunity to steal “P1,” as both Lorenzo and Stoner had incurred wicked “High-sides.”

Yet, “The Doctor” (Rossi) was unable to pull off the maneuver, managing only to eclipse Stoner on his final Flying lap, and thus, Row 1 was set with Lorenzo keeping his Pole, Stoner in third and Rossi in-between the to vanquished riders, being the only one to show up for the post-qualifying interview…

Meanwhile Stoner’s Ducati teammate, “The Kentucky Kid,” a.k.a. Nicky Hayden managed to nab his best qualifying position of the year – winding up eighth, his first top ten of the season; while Colin Edwards on his “Sudo-Privateer” Yamaha had another strong outing, finishing one spot ahead of Nicky in seventh.

Yet it wasn’t to be “the Doctor’s” day, as the legendary rider who’s just scored his 100th career victory, along with eight World Championships, (one 125GP & 250GP, one 500GP and five MOTO GP’s as the top 500GP class transitioned from 500cc two strokes to 990cc four strokes before shrinking to the curren 800cc limit) wasn’t able to catch Dani Pedrosa on the factory Repsol Honda, ending the Japanese company’s victory drought by holding off the hard charging Rossi. Pole sitter Lorenzo took the final podium step, with Ducatti’s Stoner and Hayden finishing P4-5 respectively while Edwards wound up a respectable P7.

Hmm? Perhaps a trip to Indy is in order? Uhm, looks like I’ll be tied-up this weekend, BUT I’d rather see these rocket ships at Laguna Seca! So may be next year? Although I do highly recommend attending Indy if you’re anywhere near as these Machismo Scooter Piloto’s are simply AMAZING!
Posted by Tomaso at 8:39 AM