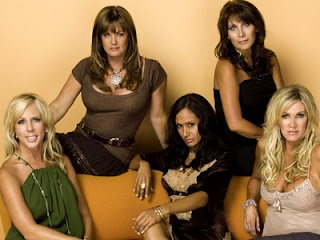 I’ve just received the following from Margot, about a TV show I’ve never heard of, nor watched... But, hey, like she says; if you’re desperately seeking some Indy Car footage, then you may wish to check out the following episode tonight. (Check your local listings for time)
Thanxs, Margot.

I know that this might be a little outside of what you normally write about but since your blog is dedicated to the world of Indy cars I thought you and your readers might enjoy hearing that in tonight’s episode of Real Housewives of Orange County on Bravo the Indy 500 is featured when one of the housewives and her husband head there and get the VIP treatment.

Anyway, we have a short clip featuring the event – it’s quite entertaining and I thought you and your readers might enjoy this clip as something a little different than what you normally write about….

Gretchen (one of the Housewives in the show) goes with her husband Jeff (whose background is in the car industry) to the Indy 500 and gets the VIP treatment as she gets to ride around the track and she has no idea who anyone is.
. (Wait for it... Its after the intrusive advertisement) And its been a long day, as hopefully this is the correct video: Gretchen really does go to Indy
Real Housewives of Orange County airs Tuesdays @10pm on Bravo...(I’ll assume that’s Eastern Time?)
Posted by Tomaso at 10:13 AM