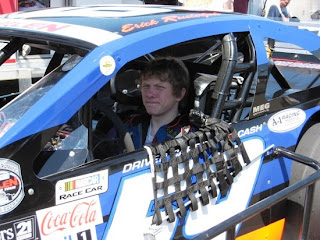 ‘Twas the day before Christmas, when through all of the paddocks.
Not a motor was idling, not even a single Cosworth “Lump” could be heard.
The garages were swept and tidied with care, In hopes that Roger Penske soon would be there; The mechanics were nestled all snug in their beds.While visions of Championship bonuses danced in their heads. (Not to mention Hulioe!)And “Princess” in her negligee, and Paul Tracy in his crash bucket, had just settled down for a quick tryst in the sack.
When out on the lawn there arose such a racket, ‘ol PT sprang from the bed to see what “TAG, Suitcase Servia, Whiney Bags and Bad Bobby D’ were groaning about.

The smoke from between Sea Bass’s ears. Glistened like a smoke signal, without a glow. When, what to PT’s wandering eyes should appear.But a Ferrari ENZO followed by an armada of Prancing Horses in tow.
The ENZO was piloted by an ex-Formula 1 driver, still brutally quick.That Tracy knew in an instant it must be Michael Schumacher.More rapid than a grid full of Bridgestone alternate “soft tyre” Formula 1 chassis in “Qualie Two” light fuel tanks mode. The seven times World Champion whistled and jeered, and called them by name;

As tyre tracks that leave ominous black streaks behind. While Herr Schumacher leaves another competitor far behind!

The revving and idling of each assorted Ferrari. As PT rubbed his hands. Down the chimney Schuey forlornly came. He was dressed all in Scuderia Red, from his head to his foot.And his Nomex driver’s suit was all tarnished with ashes and soot; an assortment of winning trophies, he’d stuffed into his back pack.

His eyes -- how they twinkled! His rosy cheeks, how they glowed.
His hair as always was perfect, his jaw like a chisel! His lips clenched in a mischievous smirk. As the smile was reminiscent of a Cheshire cat;

The remains of a Cuban cigar hung limply from his teeth. As clouds of Smoke encircled his head like a wreath;
He had a taunt face and washboard abs. that still showed his youthful physique when he laughed at the dumbfounded PT. He was strong and fit as an ox, a festive and jolly elf; Thus Tracy could only laugh when he appeared
A wink of his eye and a twist of his head. Soon gave PT nothing to fear. As Schuey spoke nary a word, but went straight to his work. Filling all of the stockings with various racing trinkets. (Such as the 2002 Borg Warner Cup, a new three year contract signed by P.L. Newman & Carl Haas along with some of the Hamburgular’s secret winning sauce…)

Before PT could wipe away his astonishment, the famous German turned Quickly, laying his finger aside of his nose. And giving a nod, up the chimney he rose; He sprang to his idling ENZO, and to his waiting minions gave a whistle. And the screeching of tortured Ferrari lumps could be heard as they burst away like rocket ships! But ‘ol PT heard him exclaim, as he power-slided out of sight;
"Happy Holidays to all, and to all a good-night."

Felice NavidadTomaso
Posted by Tomaso at 10:02 AM