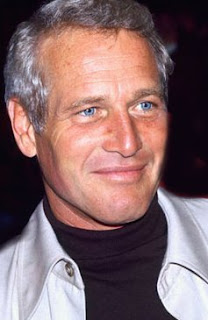 As many of you may know by now, Paul Newman passed away on Friday, September 26th at the age of 83... As typical, I first heard the sad news on the Friday practice coverage of this year’s inaugural Singapore Grand Prix.

And what could I possibly say about such a legendary figure? As I only know of Paul Newman first thru the camera lense and secondly as the team co-owner of Newman/Haas Racing... Who for many, many years were one of the “Enemies,” as first Mario and later Michael, were always potential winning threats. And PL was partially responsible for bringing “BLOODY NIGE” (Nigel Mansell) to CART at what most likely was its zenith, actually causing more buzz over CART then the series he’d left as reigning World Champion; Formula 1! Newman got even further rave reviews from myself over his fortitude of staying away from the Speedway for 12yrs; Saying he had a problem with the management... And Newman/Haas Racing is arguably one of the most successful Indy Car teams of all time, with 107 victories and 8 Championships.

And I certainly haven’t seen all of Mr. Newman’s cinema work, nor hardly very much of the some 60 odd films he took part in, yet I’d have to say the film that left the most indelible mark upon me was his performance in The Sting, followed much later on when he came back once again as a pool hustler in The Color of Money...And somewhere along the line I saw the wonderful film Butch Cassidy and the Sundance Kid.

Yet, I also recall watching him kick ASS in the SCCA Trans Am racing series, when he drove an all black, un-sponsored #4 Roush Ford Mustang to victory, as many may not know that Newman was quite serious about his racing career and won four SCCA National Championships between 1976-86 behind the wheel of Bob Sharp Racing Datsun’s/Nissan’s, most notably 280Z’s, as the actor had gotten the racing bug while preparing for his role in the film Winning (1969) and it would take a further three years for Newman to find the time to get his racing license and win his first event behind the wheel of a Lotus Elan. Paul would capture his first SCCA title in D Production in 1976 followed by the C Production crown in ‘79 and two GT1 titles in 1985-86.

“In the 1970s, Newman, admittedly bored with acting, became fascinated with auto racing, a sport he studied when he starred in the  film, "Winning." After turning professional in 1977, Newman and his driving team made strong showings in several major races, including fifth place in Daytona in 1977 and second place in the Le Mans in 1979.”

Newman made history by winning the Daytona 24hrs at the age of 70 in 1995 and his final major racing event was the 2005 Rolex 24 at Daytona at the age of 79, which I recall being the cars number, when he climbed behind the wheel of a Daytona Prototype with fellow drivers Sebastian Bourdais and Cristiano Da Matta, as I also seem to recall the car had hastily painted on flames after the car had caught on fire.

Thus, while I missed the first ten minutes of last night’s Speed Freaks program, it was a quite well done show, with a two hour tribute to the legendary Paul Newman, with the first guest being none other then Mario Andretti, who was followed by Kyle Petty. Having run long with the first two guests, Christian Fittipaldi was next on the line, followed by current Newman Haas Lanigan drivers Justing Wilson and Graham Rahal, followed by Stanton Barrett, a very brief interview with Gil De Ferran and a written statement by Tony Stewart.

Tony Stewart:
”Paul Newman was a phenomenal individual who made a profound impact throughout his life. His acting skills are well-known, but equally impressive was his desire to give back and help those who just didn't get the same shake out of life that we did,"
Besides his most impressive charity work for the Hole in the Wall Gang, of which in typical Newman understatement, I wasn’t aware that he’d personally help open a branch in Carnation, WA in 2007... I find it most impressive how Paul Newman & Carl Haas left Bruno Junqueira’s seat open for him after his terrible accident at Indianapolis in 2005...

Paul Newman
Posted by Tomaso at 10:13 AM