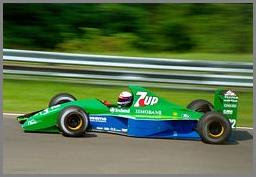 Whale! It’s that time again... When the Dog Days of August give way to September’s change ‘O colours, as the leaves of various trees make their yearly transition towards fall... Which of course inevitably leads to you know what? Yeah, that’s right, (besides all of ‘dem Brats goin’ back to school; Yippee!) the beginning of gridiron sports, as in Football... NO! NOT the real Foosball, but that All Americana pastime, a la College and Professional Football.

And having just begun the 2008-09 NFL season, I was struck by the trivia question... How many brothers have played the sports most important position; Quarterback? Isn’t it ironic?” That this subject would appear on the same weekend that four NFL QB’s would experience injuries... Assuming Y’all have heard ‘bout New England Patriot’s Tom Brady’s season ending knee injury, while opposing Kansas City Chief’s Brodie Croyle suffered a separated shoulder in the same hard hitting season opener. Tennessee Titan’s Vince Young injured his knee and SF 49ers Alex Smith was in street clothes due to being physically unable to play due to pain in his surgically repaired shoulder... Hmm? That’s 1/8th of the National Football League...

Yet, I’m guessing that most of you are probably aware of the most famous duo who’ve both won Super bowl’s and been named MVP’s; as in none other then the Manning’s, but how many more were there?

And with this quest over the brothers of the NFL gridiron, I was left further pondering how many brothers had competed in Motorsports? Of which I’ve compiled the following short-list. (Which may NOT be complete, Danny!)

So just who are our “Two” competing teams? In the midnight blue and yellow colours are the Europeans, a.k.a. Formula 1, while in the predominantly white jerseys festooned with red, and blue pin striping are the Americano’s, a.k.a. Open Wheel Racers...

And here’s the coin toss... The Europeans have won the toss and have elected to receive in this impromptu, imaginary pigskin classic. And it’s a touchback and the Europeans will start from their own twenty yard line...

BRABHAM; Geoff, Gary and David
Of these three brothers, David, the youngest of the litter was the only one to actually race in F1, upon having won the 1989 British Formula 3 championship and making his debut for the faltering Brabham team in 1990, albeit under Bernard Ecclestone’s ownership, as Gregor Foitek’s replacement. After being dropped from his namesake’s Grand Prix team, he joined the ill fated Simtek operation for the 1994 season alongside the departed Roland Ratzenberger.

Afterwards, he decided to concentrate upon Sports Car racing, having captured many major victories and is currently competing in the American Le Mans Series as Scott Sharp’s co-driver of the Highcroft Acura LMP2 entry.

Meanwhile, middle brother Gary had a very brie tenure in the rarefied stratosphere of Formula 1, with the stillborn LIFE project, which he quit after failing to qualify in two races and focused his driving efforts elsewhere, predominantly in Sports Cars, of which he won Sebring for Nissan in an NPT-90 Prototype with co-drivers Derek Daily and Geoff Brabham. He also contested two Gold Coast CART races in 1993-94 for Dick Simon and Bettenhausen Motorsports respectively.

Elder brother Geoff could be considered to be the most successful of the Brabham trio, although he never actually attempted F1, he did contest several seasons in CART, along with racing in the Indy 500 ten times, with a best result of 4th in 1983. Geoff won the Can Am title in 1981 and then thoroughly crushed the opposition aboard the Electromotive Nissan Prototype enroute to four successive IMSA GTP Crowns from 1988-91. Geoff also won the 1993 24 Heurs du Mans.


RODRIGUEZ; Pedro and Ricardo
As I previously scribbled in Cinco de Mayo, it was the younger (19yr old) brother Ricardo who sparked the Nation’s lust of hosting an International Grand Prix with his rise to prominence during his various Sports Car drives, having finished second at Le Mans and third at Sebring. These performances apparently caught the attention of Enzo, thus being invited to drive for the Scuderia Ferrari in the 1961 Italian Grand Prix before graduating to a full time works drive in 1962.

Although 1962 wasn’t a hugely successful year for Ferrari in F1, Ricardo did win the Targa Florio aboard a 246 Dino SP, while making five starts in Formula 1 (1961-62) and scored points in the Belgian and German Grand Prix’s before Enzo decided not to send his cars to Mexico City. Sadly Ricardo would perish during practice for the 1962 non-championship event while driving a rented Rob Walker Lotus 24 racing car.

Thus, while Mexico was deeply morning the loss of 20yr old Ricardo, elder brother Pedro was now contesting major Sports Car events, having won the 1963 Daytona Continental for Luigi Chinetti, behind the wheel of an N.A.R.T. Ferrari 250 GTO, as the Continental was the forbearer of today’s Rolex 24 and originally began as a three hour race. In 1964 Pedro would win once again, this time sharing the N.A.R.T. Ferrari 250 GTO with Formula 1 World Champion Phil Hill as the event had been lengthened to 2,000 Kilometers.

Pedro had also made his way into Formula 1 by 1963 and would blossom into Mexico’s most successful Grand Prix driver, ultimately contesting 54 Grand Prix’s for Ferrari, Lotus, Cooper and BRM, (1963-71) as Pedro would win two events, the 1967 South African GP for Cooper and the 1970 Belgian GP for BRM.

Pedro was also a gifted Sports Car pilot, having contested Le Mans 14times; Pedro was victorious for John Wyer’s Gulf Ford GT 40 effort in 1968 before signing a contract with the Englishman and winning the World Sports Car Championship aboard the all conquering Porsche 917 two years in a row.

Pedro also won the North American Ice Racing title in 1970 as well as finishing fifth in that year’s Charlotte World 600 RASSCAR event before his untimely death in a Sports Car event at the Nurburgring behind the wheel of a Ferrari 512 in 1971.


SCHECKTER; Ian and Jody
I was actually unaware of the fact that Jody’s elder brother Ian had competed in Formula 1, albeit a very brief career, making his debut in his home countries event, the South African Grand Prix in 1974 aboard a non-work’s Lotus. He also contested the same event aboard a privateer Tyrrell, before securing enough funds to land a full season’s drive for March in 1977, but poor showings for the team brought an end to his F1 career after 20 Grand Prix’s, with his final race being that season’s Canadian GP.

Younger brother Jody was the more successful of the two, scoring a total of 10 wins, 3 poles and claiming the 1979 World Championship for Ferrari, the Scuderia’s last Driver’s crown prior to some dude named Schumacher...

Jody made his F1 debut for McLaren in the 1972 USGP at Watkins Glen before moving to Tyrrell for his first full Grand Prix season in 1974, following Sir Jackie Stewart’s retirement and Francois Cevert’s death, scoring his first two Grand Prix victories at Sweden and Britain and giving :Uncle Chopper” (Ken Tyrrell) a much needed boost. In 1975 Jody claimed victory in his home Grand Prix.

For the 1976 season, Tyrrell unveiled the radical P34 six wheeler, which Jody drove to victory at the Swedish Grand Prix and finished an amazing third in the Driver’s championship, before leaving to join the start-up team of wealthy industrialist Walter Wolf for the 1977 season, shocking the field with a debut victory aboard the team’s Wolf WR1, which the legendary “Doctor Who’ contributed upon and Jody finished runner-up in the championship to Niki Lauda on the strength of three Grand Prix victories.

For the 1979 season, Jody joined the Scuderia Ferrari Marlboro alongside Gilles Villeneuve enroute to his finest hour in Formula 1, taking the World Championship aboard the 312T4 with three wins, yet his title defense in 1980 wasn’t a success, struggling aboard the 312T5, even failing to qualify once and he retired from F1 at the end of the season.

since retirement, he made a sizeable fortune selling his Firearms simulator business, along with overseeing the racing career’s of his sons Toby and Tomas and currently spends his time as an Organic Farmer upon having bought Laverstoke Park farm and can sometimes be seen during Peter Winsor’s grid walks.


SCHUMACHER; Michael and Ralf
What can I say about this most legendary Formula 1 driver! As my esteemed Blogmeister Miguel commented: Michael Schumacher is simply BAD ASS for kicking everyone’s ASS in F1 so long! And he’s undoubtedly one of the sports greatest drivers of all time and leads all categories statistically...


Herr Schumacher’s records in Formula 1 will most likely never be broken. (Certainly not in my lifetime) And although retired, what does this German Wunderkind do for amusement? Simple, he rides MOTO GP “Scooters,” races Superbikes, goes testing for Ferrari and gives astounded taxi cab drivers the ride of their life when he’s NOT busy clipping innocent bystanders!

Of course younger brother Ralf pales in comparison to his legendary brother, as I’ve fondly taken to nicknaming him Ralfanso, since he continuously boasted about being the third best driver on the F1 grid... Hey Ralfanso! You’re NO Michael Schumacher, so sit down and SHUT UP!

Although I suppose I should cut him an ounce of slack, eh? Having after all been a Grand Prix piloto... NAH! As Ralfie was even outscored in career victories by his more enamored (and successful) teammate, some Roundy-round boy named “MAC” Montoya... As Juan Pablo scored a total of seven wins for Williams-BMW and McLaren, not to mention his Indy 500 victory, CART/Fed Ex Championship and F3000 title...

While Ralfanso managed to score six wins for Williams-BMW, before ex-manager Willi Weber enticed Toyota into paying an outrageous retainer for his services before being fired by the German, as Ralfanso has now schlepped his way into the DTM to compete against the likes of Katherine Legge.


WINKLEHOCK; Manfred and Joachim
Unfortunately I know very little about these two brothers from Der Fatherland, except that Manfred was an aspiring Grand Prix piloto before his death at the wheel of a Porsche 962 at Mosport.

Reportedly Manfred’s biggest set-back to his racing career was starting too late, having been a mechanic before being noticed by BMW upon winning the 1976 VW Junior Cup, as BMW would ink him to a deal to race their 320 Saloons alongside other eventual F1 drivers Eddie Cheever and Marc Surer.

Manfred, made his Grand Prix debut in 1980, standing in for the injured Jochen Mass at the minnow-esce ATS team, which apparently was a BMW “Farm” team... Manfred would soldier on with ATS until new kid Gerhard Berger showed up towards the end of the ’84 season. Manfred then switched to the RAM team before his unfortunate death.

Upon his older brother’s death, Joachim briefly halted his career, before resuming and winning the 1988 German Formula 3 and Eurocup championships, before turning his attention towards F1. For the 1989 season, Joachim joined the little AGS team and after failing to pre-qualify for seven events, focused his energies on Touring Car racing with BMW instead,

“Smokin’ Joe” then went on to a very successful Touring Car career, first winning the Nurburgring 24hrs race twice, before capturing multiple Touring Car championships, along with the Spa 24 Hours before capping his career with victory in the 1999 24 Heurs du Mans for BMW...
Posted by Tomaso at 12:25 PM