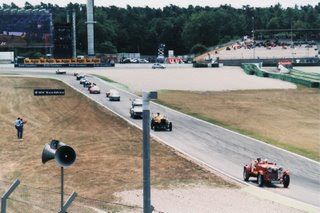 As Y’all may be aware of... Your humble scribe managed to partake in this year’s German Grand Prix, Ja Volt! And thus has since been suffering from post Formel-Ein-us, as in there’s simply NO WAY! To adequately describe the thrill of being at a Formula 1 race live in person...

Yet, nevertheless, here’s my story recap of frolicking about in Der Fatherland this past July, to which I’ve already scribbled about our MADCAP attempt of retrieving our Grand Prix tickets in; Ticket Schumozzle

(TICKETS? WE DON’T HAVE YOUR STINKIN’ TICKETS; JA VOLT! )

Thus, whilst awaiting the arrival of said document... We continued our Holiday in spite of this circumstance and hence, feeling fairly confident that the tickets were finally on there way from Norte Americano... we decided a side trip to Paris was our best course of action while awaiting the delivery of said tickets...

As thanks to Saskia, we’d learned that Paris was only 4hrs away from Germany via the Talis operated TGV high speed train, of which I was told by Vladi blasted the rails at a top speed of 310-320kph... (192.5-198.7mph!) Even worse was the fact that we had to ride in Comfort 1 (First class) on our way to Gay Paree... SHEISA!

But Paris was fantastic, as Claire and I literally walked the soles off of our shoes... Well, at least I did! Thanks in large part to Saskia’s wonderful suggestions of all the possible sightseeing options we could do via foot...

And thus after returning late Thursday evening after an endless two nights in Gay Paree, we were very relieved to finally have our GP Tickets awaiting us, talk about being “Just-in-Time, eh?” Having arrived from Norte Americano the day prior! And thus as our sleepy heads hit the pillows, we both managed to sleep thru the next morning’s alarm...

As Claire noted how difficult it was to switch languages, having learned to :deutsches wenig sprechen,” then attempted learning a wee bit Francois, before having to abruptly switch back to Deutch, Ja Volt!

Fri, 7/18After breakfast and having packed our camping backpacks for the following adventure, we walked the now familiar path to the awaiting commuter train stop in Bergisch-Gladbach and made our way to Koln (Colone) Central Station, for which we had tickets for the 1PM train.

From Koln we took the “Slow” (regular speed) Train (opposed to the more expensive I.C.E. high speed train which only saved one hour from our travels. (For an additional $28 Euros, one way)

Our train trip was most pleasant, as we passed alongside the “Romantic” region of the Rhine River, as Claire constantly noted the various kastels in the distance, before departing in Manheim. (Major cities from Koln: Bonn; Koblenz; Mainz; Mannheim. Transfer at Mannheim, 2-3 stops prior to Stuttgart)

Exiting the train, we transferred to a normal “Inner-city” commuter Train for a 15min ride to Hockenheim and while aboard, a British lady standing next to us said; “I think that approx. 7/8th’s of the passengers aboard must be going to the Grand Prix...” When Claire asked her if she knew how to get there, she just shrugged and said she had a map...

Arriving at the Hockenheim train station at 4PM, there were absolutely ZERO signs to the Shuttle Buses or the Hockenheimring and thus Claire went inside the nearby Panda restaurant, asking for directions from the Chinese owner, who gave her directions in German. (Huh? Confucius sez what’s wrong with this picture?)

And thus we began our march thru the tiny city of Hockenheim in search of the race track, with the sounds of racing vehicles off in the near distance, while we cut thru a park, an elderly German woman with walker parked nearby asked us where we were going in Deutch... To which all I could think of to respond was; Formel Ein, as we continued our trek towards the race track.

Thus it seemed a tad ironic as we emerged from the park, that we were asked in Inglish if we knew the way to the train station? (Like we know where we’re going, eh?)

Continuing onwards, Claire asked if I smelled anything? As she told me that Hockenheim smelled like sewage! (Pew-ee!)

Yet, its all kind of a blur now, as we must have crossed over the Autobahn, which does indeed run right down what used to be the middle of the original race track, when this portion of the (A6) Autobahn was built in 1965, as we stopped to ask a man directing traffic in front of one of the numerous camping facilities; where is ours? But, he wasn’t very helpful and told us to move along... So Claire decided we’d simply walk to the track’s main entrance where certainly they’d be able to help us; Buh-buh-buh-believable!

So after a short walk, we approached the main gate and stopped to ask for assistance from the yellow vested circuit workers. (A la the Yellow Shirts at some ‘lil track named Indy...) And I smiled incredulously when Claire asked them; Sprecken ze Inglish? To which the five workers ALL pointed at each other... As in; “Like it’s your turn to deal with these Dumbkamf visitors!” But none of them could help us find our campground location, nor where the shuttle bus was located, instead giving us a map and setting us off on the scenic route for the lone known shuttle bus locale in town.

Now having walked for quite some while, after having turned around once after going in the wrong direction, Claire said mockingly; Did I say I saw a shuttle bus sign or was I just imagining things? (Did I have a dream, or did the dream have me?) As my notes say that WE WALKED FOR FUCKING EVER!!! By this point I was simply in full keep upright mode as my backpack was beginning to feel like 80lb bag ‘O cement... As the full weight was upon my shoulders and not my hips as I was informed later that evening by Claire.

Oh, that’s right you wanted some water an hour ago, Claire mused. Stopping at a tiny little store, Claire went inside to buy me some water and ask for directions... Yet, unfortunately our map was so BAD! That even the locals couldn’t decipher it and thus we continued our panoramic exploration of Hockenheim, SHEISA!
In the end, we walked for approx. 2hrs PLUS! With our heavy backpacks, touring the entire city of Hockenheim (repeatedly!) vainly searching for the flippin’ shuttle bus to our campground 7 kilometers outside of town, as Claire told me sternly NOT to get LAZY with my feet as she didn’t wish to carry me anywhere... As I was carrying quite the load!

Look it’s the train station we started at! Thus, we promptly dropped our packs as I was profusely wringing wet in sweat from our long march. Claire found me a bench seat to sit down on while she went off to attempt calling the F1 Campground we’d been so doggedly searching for...

And while waiting for a taxicab to show-up, we were fortunate enough to co-erced a taxi driver who’d shown up for another fare into taking us to our isolated campground, before waiting an hour for the site’s manager to show-up. So, Claire said; (FUCK IT!) I’m sitting down on the grass after handing me a beer...

But hey, at least we got the really small (Economy) tent (NOT!) that we’d pre-ordered. As our two person tent was built to sleep at least 12 comfortably! (Can you say Party tent?) And thus we spent the remainder of the evening relaxing inside our cavernous accommodation and listening to a very funny local man singing Deutschland songs, first making all of the Kindren laugh and then later getting all of the adults to sing along...
To continue reading, see; Hockenheimring (Part 2)
Posted by Tomaso at 7:52 AM