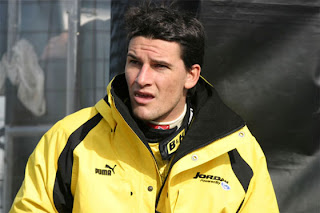 While writing about the good fortunes of Italian motorsports the past weekend, while history was made during the Italian Grand Prix, along with The Doctor’s good fortunes at the Speedway, I forgot to mention that Italian Georgio Pantano finally got the monkey off his back, by capturing this year’s GP2 Championship also at Monza, Italy... As I hadn’t watched the race yet!

But the elder statesman of GP2, at the tender age of 29, having contested 75 GP2 events, did indeed clinch his very first title and now aspires to join the Formula 1 ranks, although this seems unlikely, largely due to his age, as youngsters like Bruno Senna, series runner-up to Pantano, Sebastian Boomi, (6th overall) Lucas Di Grassi, who finished an amazing 3rd overall, driving only a partial season and reigning GP2 Asia Champion Romain Grosjean, who finished 4th overall, all clamour for F1 seats in the near future.

And don’t forget about Karun Chandhok, (10th overall) who was just handed the series "best driving style" award, as I’m certain that Vijay Malia (Not to mention Emperor Bernardo!) would most likely wish to see Chandhok in F1 just-in-time for the impending 2010 Indian Grand Prix... As I wonder if Giancarlo Fisichella is simply keeping the Force India seat warm for him?

Yet, further implications towards this quintet of “Young Lion’s” potential superstardom vs. Pantano, is the fact that they all have a major advantage over the Italian, as Boomi and Chandhok are both sponsored by Red Bull, along with Boomi being Red Bull Racing’s F1 test and reserve driver, while Di Grassi and Grosjean are both Renault F1 test drivers and Di Grassi seems to have overshadowed GP2 pre-season favourite Grosjean.

And let’s not forget series runner-up Bruno Senna, whose name alone is a sizzling commodity in regards to a future Formula 1 career, as rumours suggest that either a drive with Scuderia Toro Rosso or McLaren as Lewis Hamilton’s teammate abound...

Georgio Pantano interview
Posted by Tomaso at 6:39 AM