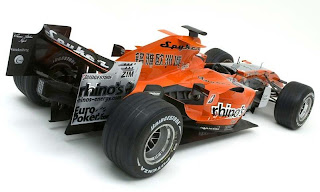 Lately there has been much speculation over whether or not the Spyker F1 team will remain part of the Formula 1 circus, as apparently the parent company Spyker Cars NV has been borrowing heavily from the F1 teams revenues in order to stay afloat.

Hence the disputed departure of Cristijan Albers due to late payments, the release of Giedo Van der Garde after a protracted contractual wrangling with Super Aguri F1 and finally Sakon Yamamoto bringing boatloads of Yen to claim a drive for the remainder of the 2007 season as Albers replacement.

Recently Maul resigned from his post at Spyker Cars, being replaced by newly installed CEO Hans Hugenholtz, in the first step of separating the two companies.

This appears to have been part of the plan to make way for the selling of Spyker F1 team to a consortium involving the Maul family and India’s Vijay Mallya which has just occurred. Therefore the Spyker F1 name will leave Formula 1 after just one year and could be rebranded Kingfisher F1?

The deal reportedly cost $80 million Euros ($54 million USD) and will undoubtedly see Michael Maul remain as head of the new F1 outfit with no known staff changes planned. Further details will be learned when the deal is finalized, since it must legally be announced on the Amsterdam Stock Exchange. No doubt having to pay off the remaining $38 million owed to Alex Shnaider, owner of the previous MF1 Racing team of which apparently Spyker Cars NV was in danger of defaulting on.

There are reports that the Stock Exchange’s regulator is upset with the Dutch car maker and is insisting that the “Cooked Books” be revised for 2006, sighting many problems with these figures. While the company has just reported losses of $28.8 million and $13.3 million for the F1 team respectively.

The new ownership seems to dovetail nicely with the upcoming 2009 Indian Grand Prix and I suspect that Narain Karthikayan will become Adrian Sutil’s teammate for the 2008 season…
Posted by Tomaso at 8:18 AM