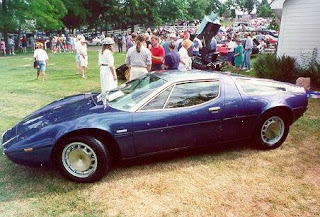 In what is becoming my new yearly Labor Day tradition, I once again attended my favourite local Italian car show, while being the fourth successive year the Italian Concours had a new venue.

Although I’d heard about the car show for several years, I’d always been unable to attend since I had traditionally trek north to Canada for the Molson Indy. Yet four years ago I finally went to my inaugural Concourso with my good friend Yutaka, as we attended the show on a post card perfect day in the idyllic setting of a Seattle “Indian Summer.”

Moving from my favourite locale of Pier 62-63. (Downtown Seattle) These waterfront piers have been deemed structurally unsound and have been undergoing renovation for the past few years.

Thus the venue moved to the end of South Lake Union in 2005, which I once again attended with Yutaka prior to his returning to Japan. Of course the setting wasn’t as enjoyable as the waterfront locale.

Last year’s new location was the Magnuson Athletic fields at Sand Point. (Unfortunately I’d billed this to friends as the “best kept secret” Italian car show in Seattle, which might have been a little too hard to swallow?) As I’m a pushover for Italian machinery... Ok, so it doesn’t compare to the real Concourso Italiano held each August in Monterey, CA. But Hey! That’s the granddaddy of all Concourso’s.

2006 Italian ConcoursOn a hot “scorcher” summer day, the “Dry ‘N Distant” expanses of Magnuson Park offered zero shade, dusty baseball infield and scattered vehicle displays. There was the usual smattering of vendor booths, (which I didn’t check out) with the spectator’s favourite vista being the covered eating area…

Once again there was a vast array of exotic Italian machinery for everyone to marvel over. Another large armada of Ferrari’s were present, along with excellent gatherings of Lamborghini’s, Maserati’s, Alfa Romeo’s, (Featured marquee) Pantera’s, Fiat’s an eclectic sampling of “scooter’s,” along with other “specialty” vehicles. The Ferrari’s and Lamborghini’s were comprised of the “usual suspects.”

Classic Italian styling flowed from the various Alfa’s on hand. A gorgeous “perrywinkle” blue Alfa grabbed my attention over the red GTV (Under 2 liter Trans Am class) parked alongside As well as a gorgeous Zagato bodied Alfa.

De Tomaso was well represented by an outstanding fleet of seven Pantera’s. Six cars were early models, (1971-74) along with a 1984 GT5. Contrary to the PA Announcer, not all Pantera 351 V-8 Cleveland’s are built “Down Under.”

I was very impressed by the black Pantera from Oregon which has been custom adapted with hand controls by its owner, who drove up from Portland…

I suppose Fiat’s are the “Rodney Dangerfield’s” of Italian cars: “Getting NO Respect, eh?” (Since I simply blew past them) I also paid little attention to the SUV and Cobra replicar. Although the Corvette Z06 was a bit out of place, it certainly garnered plenty of admiring looks.

There were several special chassis on hand including an OSCA, which I believe the name was derived from the 4 Maserati brother’s initial’s after the selling of Maserati. A pleasing Euro-spec Alfa Romeo diesel station wagon, along with a “one-off” custom Nardi.

Taking “Best of Show” was John Shirley’s 1938 8C 2900 Alfa. This absolutely stunning chassis was 1 of 5 touring coupe bodies produced. It was wonderful listening to the scrumptious harmonics of the straight-eight idling along with its supercharger’s awaiting input as the car made its departure upon receiving its award…

To continue reading, see: Concourso Seattle - Part II
Posted by Tomaso at 8:22 AM