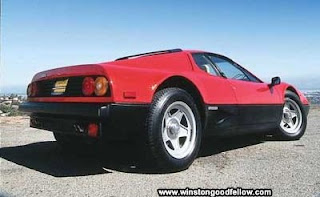 It’s funny how different the past two years events have been on all avenues, as I made my way south to the venue via public transportation. Last year I’d been forced to suffer riding to & fro the event in my friends 1964 ½ Ford Mustang convertible and 1984 Pantera GT5!!! With the best part being the ride home, as Roberto gave chase to a pack of Maserati sedans, which seemed very rattled by the sight of this wonderful Anglo-American exoticar…


But the best part of all was pulling alongside a Ferrari 512BBi at one of the numerous stoplights in the University district. “Pardon me; do you have any Grey Poupon?” As the Ferrari driver was unwilling to give us the time of day or cast a look in our direction… As the light turned green. All I could see over the snarling howl of the Cleveland’s V8 was the Ferrarista’s pilote’s overly large nose looking straight ahead…

2007 Italian Concours
This year’s event was moved to the tiny city of Des Moines, WA and held at the Marina. Which was a nice change of scenery compared to last year’s dirt baseball fields. As there seemed to be way more spectators… Perhaps due to the more confined space of the Marina’s parking lot vs. the expanses of the baseball diamonds?

Steve-Oh picked me up at the “aroma Dome” and whisked us over to the Marina, noting we must be close upon spotting a few Porsche 911’s parked on the street, before we pulled into a parking lot with an Acura NSX and traileredd Ferrari 308GT4/Dino.

Entering the Marina’s parking lot, we were greeted buy a cast of various luxury cars, i.e.; Mercedes Benz E320 & AMG along with a Lambo LM02 near the “Swag” booths, while on the opposite side were a quintet of Lamborghini’s. And DAMN! Lambo has really come out with some groovy, bright colours! As Steve pointed out how much larger the Lambo’s rotors & calipers were compared to the lone red Ferrari F430 spyder parked alongside.

Then the three most prized vehicles at the show, which were appropriately roped off, comprising of two vintage Alfa Romeo’s and a lone Ferrari F40!

The first Alfeti was an awesome “Best of Show” Pebble beach Concours de Elegance winning 1938 6C 2300, which was an absolutely stunning vehicle. Reminding me of the late ‘30’s Ford hot rods The Alfa sported a robust 114bhp and had seamless coachwork along with rear wheel spats.

The next Alfa was a 1932 8C 2300 open cockpit touring model, complete with two spare tires held down by leather strap. Intricate chrome laden running boards along with a central cockpit body fin. These were two excellent examples of Alfa’s classic automobiles…

Then over to one of my all time most favourite Ferrari’s, the F40 which is simply a brilliant exoticar! With its classic glass fibre bodywork, countless NACA ducts along with its NO Nonsense race breeding, this car simply means business! As the 3.0 liter twin turbocharged V8 produces 478bhp and propels the red rocket to 200mph! This was truly a super car for its day some two decades ago.

And then off to the meat of the show as Ferrari and Lamborghini were definitely the two heavyweight’s of the event, with near equal representation as the cast of usual suspects filled the middle of the show area.

As the Ferrarista’s consisted of many of lasts year’s contestants, along with some variations. As there was a beautiful silver 575 Maranello on hand, a great looking blue 348, three 246 Dino’s; which the stunning silver #96 was to be my people’s choice, along with two red 512BBi’s, Testarossa, 360 Challenge Stradale and several 355/360/430 spyder’s.

While looking at the jaw dropping Lambo’s, as I said before; the new colours are simply dazzling! Although Steve wasn’t impressed by the brown Murciélago… Upon asking what shade it was, he replied; Baby Shit brown! And it was also funny to witness a “Lot Boy” from Cat’s Exotics running about firing up the various “Lambor-Jeenie’s…” As one female spectator commented to us how funny it was to watch all of the Men’s heads swivel upon the unnecessary throttle wrapping of the shrieking Lambo’s…

And parked in-between the bright yellow, white, blue and black treasures, Steve pointed out to me something totally unexpected. A yellow Diablo GTR! As this is the very first “Juan” I’ve seen in public. With a second GTR in an overly gaudy red-white-blue “Stars ‘N Stripes” motif, which totally ruined the car for me.

Yet Steve and I simply couldn’t get enough of the mesmerizing electric ice blue 2007 Murciélago LP640!!! Which boasts a 6.2 liter V 12 as Lambo’s current flagship model, thus making the other remaining car groups a bit blasé to look at. There were six early model Pantera’s once again, with both the Alfa and Maserati groupings being much smaller this year. And once again the Fiat’s didn’t interest us.

Briskly purusing our way past the “Scooter” section which seemed dominated by DUC’s *Ducati’s) while trying to get to the fast closing People’s choice awards ticket booth. Steve asked if I wanted to view the Countach with its legendary scissor doors opened. Yet first Steve told me how the latest DUC’ also sported 114bhp… And our distraction to the Countach made us miss the deadline for turning in our People’s choice selections. Oh Whale!

After a quick last look around, flitting back over to Steve’s favourite, the #54 blue Murciélago, I just had to get another Ferrari T-Shirt before we finally decided to depart…
Posted by Tomaso at 7:29 AM