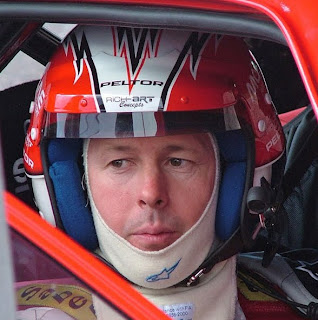 I found it disheartening to learn that former World Rally Champion Colin McRae has perished in a helicopter accident along with his five year old son and two family friends of whom one was a six year old boy this past weekend.

Unfortunately the Eurojet helicopter that McRae (39) was piloting erupted in flames upon impact, with their deaths having been confirmed this past Sunday morning.

Adding further insult to injury, this tragic accident occurred just a half mile away from McRae’s residence of Lanarkshire, Scotland and must surely be devastating to McRae’s wife and nine year old daughter whom were not aboard the stricken craft.

The extremely well liked Scot became the first British WRC Champion in 1995 along with winning 25 rallies before retiring from full time WRC competition in 2003.

While doing a few “one-off” WRC drives in 2005-06, McRae was busy pursuing other motorsports challenges. Having become a regular fixture of the Paris Dakar Rally as a Nissan “Works” driver, Colin had also been a regular competitor in the Race of Champions (ROC) along with contesting the X Games.

And this surely is another terrific blow for the WRC which in recent years has seen the passing of Champion Richard Burns along with the retirement of Marko Martin after the death of his co-driver.