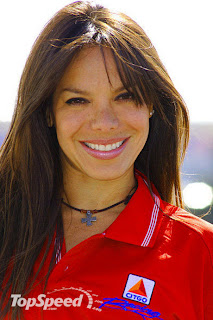 LOOK OUT Danica… There’s a new Woman in town. And she’s gunning for you.

Duno qualified dead LAST for yesterday’s KC LOTTERY 300, ending up 21st. GEEZ! Even Marty “The Back marker” Roth qualified ahead of her. And Danny B. pointed out to me, Duno was 6 ½ miles off the pace. Then again its funny thinking about how qualifying at 208mph is SLOW!

And you know you’re really desperate for racing when you make a conscious decision to sit down and watch an entire Indy Car race… But it looks like Tony “Ronnie” George is once again laughing all the way to the bank… Since the stunt worked? I mean it got me to pay attention to the (GASP!) IRL. Or should that be “Days of our Lives?”

Talk about your perfect segway… As High School Cheerleading proceeded the Indy Car race. And the Firestone pre-race show seemed more like a fashion gala then a pre-race show as all of the “big name” drivers preened for the cameras.

Top billing went to Dan “Spike” Wheldon, whom seems to always play up the cheeky Brit along with wearing the latest sunglasses. And I’m surprised that he doesn’t have L’Oreal as a personal sponsor…

Then over to TK (Tony Kanaan) who had a super great attitude prior to the race… Before cutting over to the Penske boys. Going to commercial break the announcer boomed “There’s Milka!”

In this “Made for TV” segment, the travails of Milka duno’s ordeal to pass her rookie test at KC were chronicled, before going live to Milka. Yet I found her interview pleasing as Milka seemed pretty down to earth about her day’s objectives.

Yet not to be outdone, they immediately interviewed Danica… Asking her about whether or not this was going to be the race that brought her momentum for the Month of May? And perhaps it’s just me, but Danica seemed a little bit “Bitchy!” (I’m supposed to be the lead female interviewee)

And then it was time to go racing… With “Spike” thoroughly dominating the event. Yet I sat there laughing heartily out loud as none other then Danica and TK tangled in the pits! Scott Goodyear pointed out, you never have teammates running into each other during a pit stop!

TK was so upset by the lack of communications, that Jack “I Wanna Nap” Arute (Stupid segment with Arute talking up the Jet Lag issue of flying back from Motegi) claimed that he’d come over the radio, furiously telling the team that if that ever happened again he’d NEVER drive for them again!

Danica rode around on-track while Kanaan went down 8 laps during pit work to replace broken suspension parts. And where’s Sarah Fisher? She’s 2 laps down in 13th while Duno’s 4 laps down in 16th…

And they pointed out how Duno’s spotter Pauncho “Villa” Carter was religiously reminding Milka to keep her foot planted on the floor! Keep your speed up!!! As Duno soldiered on running some 5-8mph slower than Wheldon. Milka’s top laps were in the 207mph range while her average speed was 203. With Wheldon blitzing the field at 211+!

And yet Duno finished the race (14th) which is much more than can be said for Marco andretti. Who once again retired due to handling issues, as it was way too SCARY out there for Marco… Perhaps AGR will want to borrow Milka’s set-up notes for Indy?