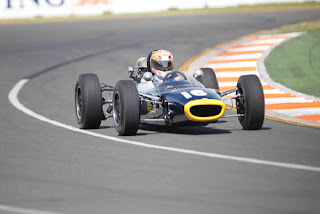 Have you ever pondered the idea of driving a “full blown” race car around the hallowed banks of Indy? And although it just seems like one more way to line Tony “Ronnie” George’s pockets… Hey, Indy is the OLDEST track in existence.

Recently I received and interesting story “penned” by “Danny B.” from Indiana: “Sinden Racing Hits a Grand -Slam“ .“ Who’s just taken the plunge and driven The Brickyard. (LUCKY BASTARDOE! Talk about pouring Salt in the Wounds…)

The closest thing I can relate to this story is the time I got to ride around Phoenix International Raceway 10 years ago. You see I was on hand to witness my brother taking part in the Bob Bondurant “Lap the Oval” experience. (Which was held after the RASSCAR event weekend) And it was pretty cool as they let me “shadow” my brother from getting suited up, the driver’s meeting and then onto the track.

Unbeknownst to me, I got to ride along in the pace car for one stint while the participants followed behind us in their identically prepared Formula Ford 1600cc race cars to learn the “line” around the track.

Prior to getting aboard the Ford Taurus SHO, a fellow instructor came up to me and said. “Ok, after you’ve done two laps around the track tell your driver you heard he crashed a Viper…”

You see, I was riding with race car driver/instructor Tim Moser, whom at the time was racing a Dodge Viper GTS/R in the fledgling American Le Mans Series…

Taking my cue, Tim laughed and said who told you that, we had an excellent chat about racing in general and what it was like hammering a Dodge Viper about, before the way too short ride around the Phoenix oval ended.

Unfortunately as is the case for many aspiring race car drivers, as far as I can tell. Tim Moser NEVER got the right break to make the leap into “Big Time” motor racing.

At that time Moser was competing against another American hopeful named Mike Borkawski. And according to Moser, he was kicking his ASS in Toyota Atlantics.

Yet Borkawski got his “15 minutes of Fortune ‘N Fame” being selected to pilot one of Bobby Rahal’s Champ Cars after a short stint in Trans Am. Borkawski was a brief “flash in the pan” at Rahal as he seemed to either not be quick enough or crash. I believe he was replaced with another American hopeful named Bryan “High Speed Hurdles” Herta. Interestingly both Borkawski and Herta are now plying their trade in the rival Sports Car series, but I digress…

The Indianapolis drive the oval opportunity sounds fantastic, and I’ll leave you to read Danny’s story to get the full details. (And yes that’s Danny at the controls of ‘Ol Yellur” above, prior to lapping at 101mph) Of course Danny didn’t mention whether or not he held off Sam Hornish Jr. on the final lap. Or if you get to drink the milk in victory circle. (I suspect that drinking the milk costs extra…)

Danny has also told me that the IRL has a two seater option available, which sounds like a much more viable option than Champ Cars current two seater program. (C’mon Champ Car. Pull your HEADS OUT!)

As you may be aware of, this year Champ Car is running the Minardi Team USA F1 X 2 seaters, which commentator and ex-CART driver Jon Beekhuis had the privilege of sampling at Long Beach. Beekhuis was estatic about the ride, which says a lot for a former driver. Afterwards Beekhuis had them show the data, indicating a top speed of 182mph…

And then the catch. Beakhuis said if you had an extra $10,000 burning a hole in your pocket… Then the ride aboard the two seater would definitely be worth it!

This seems to be one more sad example of how divided the two Open Wheel series are, as they now even have competing two seaters. Yet Champ Car seems to be getting more and more out of touch with its remaining fan base…

(And I NEVER thought the day would come when I'd be promoting Indy!)

Hopefully we’ll hear more from Danny in the coming months towards the build-up to the Month of May…
Posted by Tomaso at 8:23 AM