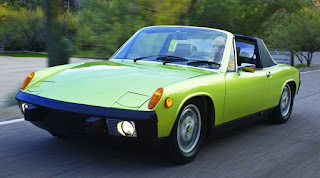 By now presumably, the Hammer's fallen upon a pristine 1974 Porsche 914 at Amelia Island. For whenever I think of 914's, I recall riding multiple times in a past-friend's, along with the more coveted 914-6 gaining fame with the late "Peter Perfect."

Also, as I noted in last year's nod to thee Isle's  annual Concours de Elegance, whenever I hear thou name Amelia Island, for reasons unknown, I always Flashback to Sir Stirling Moss being interviewed live from the Concourse de Elegance Thar on Ye B-I-G' Windbag Dave Despain's dearly missed Wind Tunnel show on SPEED. As Holy Rolex Timepieces Batman! How can it be nearly a decade ago I witnessed that?

And I suppose since Father Time's always nearby, I found myself ponderin' whom else had the recently departed Dan Gurney competed against in Formula 1 some six decades ago?

Since I knew that Sir Stirling was in the mix then, along with Tony Brooks. But had forgotten about Uncle Bernaughty's brief fling with becoming a professional Gran Primo Pilote.

A little bit Bernie, A little bit Rock 'N Roll. 1956 Jaguar D Type with interesting past up for Auction

As how many of Y'all know that F1's Grand Pooh-Bah, nee Messer Bernard Charles Ecclestone tried qualifying for his Formula 1 debut as a driver at the 1958 Monaco Grand Prix behind the wheel of a Connaught.

Which led me down another entertaining Wabbithole'. as in when's a racing driver truly not a Formula 1 Racing Driver? As I don't think I've ever heard of the main Bruce Kessler.

Ironically, Mr. Kessler, who was a Lance Reventlow Scarab Team Driver, attempted racing in his one and only Grand Prix also at thee Principality, nee Monte Carlo that same weekend of '58, entered in a privateer Connaught owned by none other than Mr. E.

And Kessler as some dubious fame, as he and his Pal Reventlow, reputedly were the last persons to see the famous actor James Dean and his mechanic alive! After having met up for lunch.

Since we all know that was aboard a Porsche 550 Spyder, but that's another story for a different time...

Partial Song lyrics from: The Eagles
Song: James Dean
Album: On the Border
Year: 1974
Posted by Tomaso at 3:56 PM