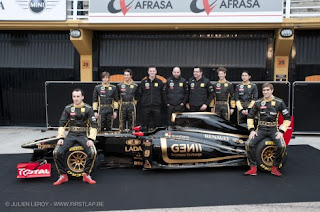 Summary
This once mighty F1 team has been thoroughly involved in the nefarious Lotus moniker anglings that have continued to ratchet-up over the latter portion of 2010 – spilling into 2011 and the Courtrooms of London. In a never ending squabble between Tony Fernandes’s minnowesqe Lotus Racing concern against the might of the Malaysian Government and its pro-Group Lotus support who claim to be the rightful owners of the Lotus moniker – as we tirelessly await the eventual outcome of this legal squabble in London’s High Court sometime this year...

Thus, at the moment, the team which saw former owner Renault sell its remaining 25% share to Group Lotus will be known as Lotus-Renault GP for the time being, having combined forces with Gerard Lopez’s Genii Capitol Investment firm.

The team’s driver line-up remains unchanged from last year, after some public shenanigan’s suggesting that Russian driver Vitaly Petrov may not be retained – but really? Is this venture that wishes to crack the Russian market really gonna send Petrov to Siberia? Meeze-thinks NOT! As the young Rooskie was re-signed for a further 2-years, which coincides nicely with the 2013 season, when Formula 1 enters a new engine formulae...

Look for lead driver Robert Kubica to continue to impress, and possibly even win a race? As the main hope is for Petrov to be more consistent and help the squad retain its fifth place standing or even potentially move up to fourth place in the Constructors championship.

Jan Charouz apparently remains with the renamed F1 Team, albeit I thought I’d seen a story claiming he’d become another Pawn in the Tit-for-Tat shagging between Lotus2.0 ‘N Lotus3! By moving to rival Team Lotus... Yet LRGP’s website claims the Czech lad will remain on the squad’s books as part of its burgeoning reserve driver fleet this season.

UPDATE
Obviously Lotus Renault’s world was rocked upside-down on Sunday, February 6th when lead driver Robert Kubica suffered his devastating accident while participating in a minor Rallying event in Italy, in which his right hand was severely injured along with multiple fractures to his leg, arm, shoulder and elbow – as the Polish F1 Star will most assuredly mist the 2011 Formula One season while recovering from this frightening accident.

Therefore the team has decided to install the vastly experienced Nick Heidfeld as Kubica’s replacement – having confirmed the German driver on February 16th, the very exact day that Kubica had his final elbow surgery, as its worth noting that ‘Quick Nick was Robert’s teammate at BMW Sauber for a few seasons...