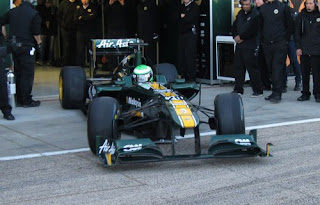 Fernandes & Co. have hopefully upped-the-ante (Ontrack) this season by dumping their Cosworth CA 2010 lump along with its unreliable XTrac Gearbox in favour of le Reggie, a.k.a. Renault. As Mike Gascoyne’s merry ‘lil crew ‘O Technicians feverishly puts the finishing touches upon this year’s T-128 powered by the Renault RS27, although reputedly the Hingham-based team won’t be running KERS and thus has reverted to a 2009-spec Red Bull Technology Gearbox, as RBT is supplying the rear end of the T-128 chassis...

Hmm? It’ll be interesting to see if this design philosophy results in a BRAWN GP/Red Bull Racing outcome – or an Ahem – Virgin/Hispania performance deficit, eh?

Meanwhile, the team’s race drivers remain unchanged for the squad’s Sophomore outing, although the mix ‘N match, Err plug ‘N play antics between the two warring LOTI-factions continues on with the swapping of reserve drivers – which seem like nothing more then glorified simulator operators these days... As Group Lotus, Err, Lotus-Renault GP shagged Fairuz Fauzy from Team Lotus – who were probably not too bothered by his leaving, eh? While I’m assuming that Karun “Cowboy” Chandhok’s new Team Lotus leather bomber jacket; which he was caught modeling at Valencia fits him like a glove...

Meanwhile the legal wrangling heads to court shortly, and won’t it be nice when this is all over? Alas – as long as Tony Fernandes is successful! But I digress...

Thus, the teams primary reserve driver will most likely be the dispatched Indian, nee Karun Chandhok, whilst Davide Valsecchi & Luiz Razia will also be on the books, albeit primarily involved as the team Air Asia GP2 race drivers...