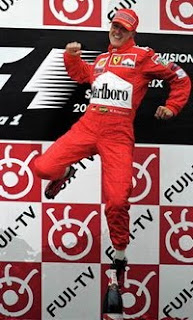 Having taken a dip in the Kiddies’ pool, after a sweltering walk in 95 degrees temperature at 12:30PM today. (Otay, I’ll stop with the weather reporting, may be?)

So what to do now? Yeah, I succumbed to surfing the internets and was floored to discover on James Allen’s F1 Blog the title screaming Schumacher to return to Formula 1…

As ironically, Seven times World Champion Michael Schumacher’s decision to return to the cockpit after an enforced three year sabbatical comes on the heels of his manager Willi Weber 200% categorically denying that his charge, Herr Schumacher… Or as David Hobbs enjoys putting it, Ralph Schumacher’s brother would NOT be returning to race in Formula 1 anytime soon, just 24hrs prior.

The 40yr old German will undergo an intense training regiment, prior to being given the go-ahead to stand in for Felipe Massa at next month’s European Grand Prix in Valencia, Spain. (Ah SHEISA! Where’s my G5 when I need it, eh? Having not seen the Terminator since his glorious victory, becoming the very first five time winner at Indianapolis in 2006…)

“Schuey,” who hasn’t driven competitively since 2006, nor having driven this year’s recalcitrant Ferrari F60 chassis, will most likely be given special compensation to test prior to racing in Spain, which should help the promoter’s immeasurably, if the Renault penalty stands.

Michael Schumacher:
"The most important thing first: thank God, all news concerning Felipe is positive. I wish him all the best again. I was meeting this afternoon with Stefano Domenicali and Luca di Montezemolo, and together we decided that I will prepare myself to take the place of Felipe. Though it is true that the chapter of Formula 1 has been completely closed for me for a long time, it is also true that for loyalty reasons to the team I cannot ignore that unfortunate situation. But as the competitor I am, I also very much look forward to facing this challenge."
(Source: Grandprix.com)
Posted by Tomaso at 3:34 PM