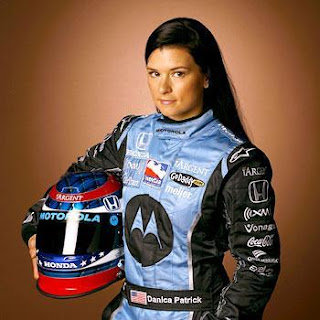 I’d say that the majority of today’s mainstream media attention is firmly affixed upon the IRL’s Danica Patrick, having FINALY WON her first major car race with some precocious fuel mileage strategy in Motegi, Japan this year…

Yet with my NON Politically Correct stance towards Princess Danicker and Milka Duno’s ride buying, while I sit firmly on the Sarah Fisher side of the Danica divide, I thought I’d shed some light on the REAL women of motorsport once again, As these female pioneers truly paved the way for Danica to live the “Good Life.” Interestingly the first women racers were in Grand Prix, prior to the modern day Formula 1 championship which began in 1950. As the earliest reports of female race driver’s centers upon a trio of women, with Eliska Junkova and “Helle Nice” being the most flamboyant. While Kay Petre made her impression due to her small stature behind the wheel of the day’s monstrous vehicles. Junkova caused quite a “stir” when it was discovered that a woman led the opening laps of the 1928 Targa Florio. While the lady behind the wheel of the Bugatti leading the event was quickly named the “Queen of the Steering wheel” by the adoring press, as the Czechoslovakian is the only woman to have ever won a Grand Prix which she accomplished at the Nurburgring in 1926.

Junkova retired from racing immediately after her husband was killed in 1928 at the Nurburgring while piloting the vehicle the couple were co-driving in the event. Helle Nice was Mariette Hélène Delangle’s stage name, as she made her fame and fortune as a Paris “Show Girl.” Amassing wealth and popularity as a dancer, she reportedly enjoyed “Life in the Fast Lane.” As rumours suggest she had a long list of multiple suitors including Philippe de Rothschild and Jean Bugatti. She competed in several Grand Prix’s during the early 1930’s. Yet sadly after the war, Louis Chiron accused Helle Nice of being a Gestapo agent which effectively ended her career. (Along with ruining her life!) Helle Nice died “penniless” in Paris in 1984. Kay Petre stood 4’10” tall, making many marvel at her physical ability to manhandle a 10.5 liter V-12 Delage while setting speed records at the famed Brooklands circuit. Petre was most likely the first female to compete in the 24 Heurs du Mans, finishing 13th overall in 1936. She competed in three Grand Prix’s in 1937 before being injured. Petre went on to become a motor journalist along with being an automotive fabric designer. After two decades of no women participants, Maria Teresa de Filippis contested three Grand Prix’s between 1958-59. While it would be almost another two decades before a quartet of female drivers attempted participating in various Formula 1 races from 1974-1992. (Lella Lombardi, Divina Galica, Desire Wilson and Giovanna Amati). Lombardi raced twelve times, becoming the only woman to have ever scored a World Championship point in 1976. Finishing sixth in the rain shortened Spanish GP, where Lombardi was awarded a half point. Lella also finished seventh at the Nurburgring. Galica, Wilson and Amati were entered, but didn’t qualify for their races. With quite a fuss caused when multiple females were entered for the 1976 British GP. Amati was the last female to enter a Formula 1 event for the struggling Brabham team before being replaced by Damon Hill, with Amati’s F1 test coming courtesy of playboy Flavour Flav… (Flavio Briatore) Meanwhile Janet Guthrie began her racing career in Sports Cars and won two class victories in the 12 Hours of Sebring, prior to getting her big break, when in 1976 Rolla Vollstedt gave her a test drive at Indianapolis, although she didn’t qualify for that year’s race. Yet in 1977 Guthrie would not only become the very first female to race in the Indianapolis 500, but also make history as the first woman to race in the Daytona 500. Guthrie would compete at Indy three times (1977-79) with a best finish of 9th in 1978 before disappearing from the Speedway’s horizon. It would be a further 13 years before a second female would participate in the Indy 500. As although Desire Wilson passed her Rookie test on May 11, 1982, she failed to qualify for that year’s race, thus it was a further decade before Lyn St James made the first of her seven appearances. St James became Indy’s first female rookie of the year in 1992. This debut race would also become her best finish of 11th place at the Speedway.
As the new millennium dawned, (2000) the third female to crack the Brickyard’s entry list was Sarah Fisher driving for Derrick Walker. Fisher has since gone on to become the only woman driver to win a Pole in the Indy Racing League and holds the records for fastest one and four lap qualifying speeds at Indy. (2002: One lap = 229.675mph; Four lap average = 229.439mph)
Next, in 2005 Princess Danica burst upon the scene, causing instant Danica mania while flirting with capturing the pole at Indy and finishing 4th in her rookie year for Rahal Letterman Racing, which is the highest finish ever by a female.

Last year, another first was recorded, when the Brickyard saw three females take the green flag for the very first time in the Speedway’s history, as Venezuelan Rookie Milka Duno driving her CITGO sponsored Team SAMAX racecar joined Sarah Fisher and Danica Patrick in the 91st running of the Indianapolis 500.

For this year’s event, much has changed for all three of these female contestants, as we’re all painfully aware that Princess Danicker still basks in the glow of winning her first victory just over one month ago, having now driven for Andretti Green Racing the past three seasons. Her #7 Motorola racecar will roll off from the middle of Row 2, having qualified 5th at 225.197mph.

Meanwhile, the driver of this trio struggling the hardest financially to make her record tying seventh Indy 500 start, without a doubt is Sarah Fisher. After a disappointing 2007 season as Buddy Rice’s team mate at Dreyer & Rein bold, Fisher decided to accomplish another first by starting her own race team and thus becoming the first female Indy Car owner. Hoping to have her team backed by Gravity Entertainment and ResQ energy Drinks adorning her sidepods, both entities have failed to wire her any money to date and Fisher has since moved on, as I’m expecting to see Her #67 Dallara’s sidepods emblazoned with her new associate sponsors, as Sarah qualified 22nd at 221.246mph and will start from the inside of Row 8.

Milka Duno has uncharacteristically “Flown under the Radar” this Month of May, having switched teams in the off season and is now part of a three car effort fielded by Dreyer & Rein bold Racing and is still backed by CITGO, Duno has eagerly taken to constantly asking her teammates Buddy Rice (2004 Indianapolis 500 winner) and Townsend Bell for advice on how to master the Brickyard. Duno qualified 27th at 220.305mph and will start from the outside of Row 9.

Thus, as Virginia Slims would say, “You’ve come a long way Baby…”
(PS: If anybody has seen Danny B’s Milka Duno lunch box laying around the grandstands at Indy, please return it to Lost ‘N Found…)
Posted by Tomaso at 8:16 AM