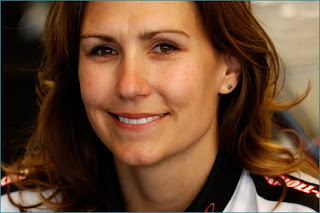 While Princess Danicker was busy snubbing The Deuce’s interview requests by leaving early to “Pump up” Indy in the Big Apple, prior to the rest of the 33 drivers arriving… Well ok, she did go along with Helio “Blue suede shoes” after all.

Another female racing driver was making her own news, as Avon, Indiana resident Melanie Troxle became the second female to win a Nitro Funny Car race yesterday at Bristol, Tennessee. Melanie’s winning pass of 5.06 seconds in the rain delayed O'Reilly NHRA Thunder Valley Nationals, makes her the first female in NHRA history to win both in Top Fuel dragster’s and “Flopper’s,” a.k.a. Funny Cars, while becoming the 14th person overall to accomplish the feat.

The final round against Mike Neff, who’s John Force Mustang erupted in a fireball at the 400 foot mark, was the first finals to feature two non-winners since 1995. Another historical first was accomplished when Troxel, a five time Top Fuel winner defeated Ashley Force in Round two, the very first All Female race in NHRA Funny Car eliminations.

Another entertaining note about Mrs. Troxle, is that she’s married to fellow NHRA Funny Car competitor Tommy Johnson Jr. and I’ll assume now holds bragging rights at home for the time being…