The Luck ‘O the Irish 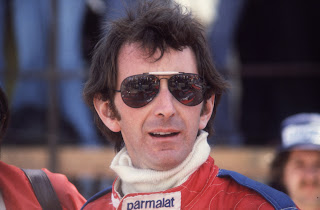 I recently heard a pair of comedians making fun of VHS’s “Hit Show; Where are they now?”” Claiming this show was cruel and degrading to the entire one hit wonders who now are working in ungratifying desk jobs.

Yet I did enjoy reading a past Linksheaven posting about where various ex-Formula 1 driver’s had gone off to, thus I decided to do a where’d they go rendition of the Irish drivers just profiled on St. Pattie’s day…

Rosemary Smith
This vivacious “Irish lass” whose good looks saw her dress designing career take a back seat as a model before her mother put her foot down and demanded she make use of her designing talents, ended up racing cars instead, after being bitten by the lure of driving fast. Upon her marriage, her husband demanded that she give up her ego trips and hence, Smith retired from racing. Yet, the wail of motor racing could not be extinguished and after the marriage failed, she once again returned to the cockpit and still competes in selected events today, taking part in the Goodwood Revival, along with making trips to Sebring. Rosemary now runs an organization promoting road safety and good driving practice to Irish teenagers

John Watson
Upon retiring from Formula 1, Wattie tried his hand in Endurance racing, along with running a driving school at Silverstone. Afterwards, he became an F1 commentator for Eurosport from 1991-97, then moved to calling the British Touring Car Championship alongside Charlie Cox for the BBC.

Wattie now keeps busy by calling the action of the A1 GP for Sky Sports with Ben Edwards and served as the honorary Grand Marshal at last year’s Zippo Historics at Watkins Glen.

Eddie Jordan
The zenith of this plucky Irishman’s dream of Grand Prix grandeur occurred in 1999, when Jordan Grand Prix finished third in the Constructor’s championship on the back of Heinz Harald Frentzen’s two victories. EJ’s team would ultimately score four Grand Prix wins before funding dried up to the extent that Eddie was forced to sell his beloved team to Carl Schnaider, whom in turn re-branded the team MF1 Racing.

Jordan still keeps himself busy with motor racing by writing a column for F1 Racing magazine along with having been named director of Rally Ireland, part of the World Rally Championship. He recently finished a TV series titled; Eddie Jordan’s Bad Boy Racers.

For recreation, Eddie has played the drums for a number of years in his band first known as V10 and now plays with a revised troupe known as Eddie and the Robbers. He also enjoys Golf and Horse Racing, along with a keen interest in Football, having a season ticket for Glasgow Celtic FC.

EJ also has business interests in V10, a brand of Vodka, along with the energy drink EJ10 and has just written his autobiography; an Independent Man, which was published in 2007.

Derrick Daly
After a somewhat successful career in Formula 1, unable to land a ride in Grand Prix, Daly moved Across the Pond and began competing in the CART/PPG championship in 1983. Derek contested six Indianapolis 500’s (1983-85, ’87-89) before moving to Endurance racing. I believe that Derrick drove briefly for Jaguar before finishing out his Sports Car career with Nissan in the all conquering 300ZXT’s.

Daly next moved to a career as a television commentator for motor racing, covering both Champ Car and the Indy 500. His antics as a colour commentator for Champ Car were noticeable, as Daly’s role has now been reduced to covering just the Indy 500 alongside SPEED’s Robin Miller, although Daly still works for local TV in Indianapolis.

Derrick has also owned a driving school in Las Vegas, along with several other business interests including his motivational company Motorvation. Currently, he’s mentoring his son’s racing career, has taken to road racing track designing and has just released a book title Race to win.

Tommy Byrne
Although Tommy was the second most successful driver in the long defunct American Racing Series and spent considerable time in the States, he never was given the opportunity to race in Champ Car and retired from motor racing in 1992. He’s since taken up residency in Florida, but runs a Teen defensive driving program at the Mid Ohio race track nine months a year.

Martin Donnelly
With many of us fearing the worse upon Donnelly being forcefully ejected from his race car that fateful day, Donnelly miraculously survived the horrific shunt, although he’d be crippled for life.

Martin then went on to manage a Formula Vauxhall team before being coaxed back into the cockpit, racing a Mazda RX8 in a 2004 Britsport 24 hours race at Silverstone, finishing in 27th place.

. He then took task to competing in Lotus track days, after first being invited to a club outing in 2006. In 2007 Donnelly bested 35 fellow competitors enroute to winning the Elise Tourist Cup, scoring two A Division victories. Donnelly currently spends time as a driver development coach for ComTech Racing as well as working at Lotus track day outings.

Eddie Irvine
Although many consider him a playboy and he certainly seems to fancy this role, “Irv the Swerve” was reported to be the fifth richest person of Ireland in 2006, having grown a portfolio of 40+ properties towards a net worth of $160 million.

Yet, Irvine continues to relish his celebrity status, having recently done a television reality show on Sky TV with his team of male drivers competing against David Coulthard’s team of female drivers. Eddie also played himself in the 2004 comedy film; The prince and me. Irv also had a brief romance with Pamela Anderson, who called the courtship off, claiming that Eddie was too sweet for her…

Irvine has also tried unsuccessfully to acquire an ownership stake in various Formula 1 teams. His previous attempts included Minardi in 2005 and Jordan in 2005-06, reportedly with Russian Vodka Czar Routsam Tariko and there are now rumours that Irv the Swerve could be potentially sniffing around Super Aguri.

Ralph Firman
After a thoroughly disappointing season in Formula 1 with the faltering Jordan Grand Prix team, Ralph contested the 2004 24 Heurs du Mans alongside Justin Wilson and Tom Coronel, along with being the official test driver for the A1 GP series, before driving for Team Ireland in 2005. In 2007 Firman and Daisuke Ito won the Japan Super GT GT 500 class for Aguri Suzuki’s co-owned ART team, becoming the first drivers to win the class prior to the end of the season…
Posted by Tomaso at 6:38 AM