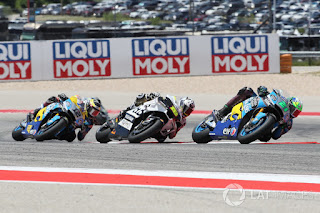 
This is Suzuki, this is Yamaha. Suzuki or Yamaha. One lump or Two?
Yeah, I know my timing's impeccable... Especially since Y'all are probably Hankerin' for some finely "tuned 'N Jetted" story revolving round "Fast Friday," or who'll be putting Thar Fire Breathin' Dallara UAK-18 on Pole at Mother Speedway, Eh?

But that's not how I roll upon thou Isle 'O Nofendersville, which you're painfully aware of if you read these Award Winning No Fenders pages regularly...

Instead, I enjoyed an article posted on my newest Racing Website I visit, named motomatters.com. For which the article was in regards to the Dilemma one of the Privateer Squads was currently enjoying. Having to debate over which Motorcycle Manufacturer to take up Satellite status with.

Suzuki or Yamaha: The Dilemma of the Mark VDS Team

After all, not only have Two Wheelers raced at Mother Speedway, but were actually the Brickyard's first track contestants after the Balloon race...

As may be it's a STIR-RETCH? But I found the quandary of choosing a Scooter' supplier loosely akin to Open Wheel Racing teams having to choose what engine supplier to align with, provided they're granted the option of choosing.

Since there was an immense amount of Politicking in order to grant McLaren's desires to ditch their Hondre' lumps; Err PU's in Formula 1. For which it now seems that the Honda Power Units potentially aren't as Bad as they've been Blamed for lately. Especially during that stellar weekend's outing at Bahrain!

And it'll be interesting to see if the B-I-G BULLZ', nee Red Bull Racing chooses Honda over le Reggie' (Renault) for 2019?

Thus imagine if Indy Cars can finally woo somebody into becoming the third engine supplier for its series, sometime in 2021? Since I think the year 2020's out, since typically manufacturers like to have a two year lead time, Me Thinks?

As I'd enjoy seeing Alfa Romeo being the Brand to do so, although I think their Commander-in-Chief Sergio Marchionne is more focused upon the Glitz 'O Formula 1? Although I'd suggest that the Indy 500's nothing to sneeze at...

Alfa Romeo back in Formula 1 with Sauber after 30yr Absence

While Alfa could build upon its IndyCar Heritage, even if the previous Championship Auto Racing Teams (CART) endeavour wasn't successful. How could you not enjoy "Mr. Spin 'N Win," nee 'Ol Hollywood', aka Danny Sullivan pedalin' an Alfetti at the Brickyard...

The History of the March Alfa Romeo Indy Cars

As certainly there's room upon the IndyCar Grid for a third engine supplier, which would presumably Bump the series entry list above the current 23-24 competitors. Not to mention relieving Chevrolet and Honda from their current Heavy workload for the Month of May!

Since I think the Bowtie's currently supplying 19 and Honda 17 Indianapolis 500 entries respectively. Which surely doesn't include spares or engines in the vernacular of 'Ol Hobbo', aka David Hobbs have Done Blown Up!

And if a third engine supplier was enticed to participate in Indy Cars, would we revert back to the Top Bananas, i.e.; Penske, Ganassi and Andretti once again becoming "Anchor Teams," a la "Works" or Factory Teams. Which occurred during the 2012 season when you wanted to be anything but "Powered-by-Lotus!"

As we remember the Maelstrom over the 'lil Minnows who couldn't get Thar Mitts upon either of the preferred Chevy's or Honda's, when I pontificated for Hondre' to do the right thing' and give Sarah Fisher Racing an engine!

whilst others not so lucky were forced to campaign the Judd designed and badged Loti's, which quickly earned the moniker Luddis' & Slowotuses'; YOUCH!

Obviously I've got ZERO Clue if this will happen or not? Even though we hear from time to time that the Heavy Breathers at Hulman & Co. are in discussion with potential third or even fourth party engine suppliers...

And now that China's Geely Group's taken control of Lotus, and has big Plans for turning Lotus into a Star Brand, why couldn't they Dust Off the Judd IndyCar engine design, tweak it to perform better and Wallah! Once again see Lotus racing at the Speedway?

But then again, would that mean we'd have to put up with seeing that I just Swallowed a Canary Toothy Grin of Kevin "Smiley Face" Kalkoven's on the Indianapolis Motor Speedway's Grid?
Posted by Tomaso at 10:00 AM