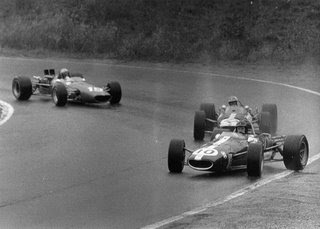 For the past few days… (including this morning) Not for the first time, nor most likely for the last the Speed Channel aired the movie Grand Prix…

I suppose as a true Formula 1 fan I should be chagrined to admit that I’d never watched this movie in its entirety. Although I’ve seen bits & pieces over the years, I’ve never been able to sit through the whole movie... (Especially with Speed Channel’s 4 hours, 30 minutes air time)

I did find it very entertaining to watch the first 40+ minute portion which was totally devoted to the actual making of this epic production. It included interviews with director John Frankenheimer and the movie’s leading man James Garner -being quite entertaining hearing Garner’s comments regarding the movie.

Originally the directors had cast Steve McQueen for the lead role, which he would have been amazing in, yet the meeting with McQueen went horribly wrong and McQueen stormed out. This left the door wide open for MGM’s golden boy; James Garner whom the studio wanted and forced the directors to take on.

To me there seems to be several ironies to this movie. Garner’s main nemesis in the movie is named Scott Stoddart. (Obviously no relation to Paul Stoddart) The Japanese entrepreneur that Gardner ultimately drives for is named Mr. Yomura and seems eerily painted as Mr. Honda… And in one scene Mr. Yomura tells Garner that he tried buying the Jordan-BRM team, which bears NO relation to ex-F1 boss “EJ’s” (Eddie Jordan) fledgling Privateer team.

Produced in 1966, the movie cost approx. $9 million to complete, estimated at $220 million in today’s dollars.

It featured many inventions in the realm of filming a race movie. Most notably a hydrogen cannon used to shoot the race cars into the water. The cars engines were removed and a steel sleeve welded inside. This allowed the cannon to fire the cars in any direction.

And speaking of the cars, I had to chuckle, seeing ‘ol “Shel’s” (Carroll Shelby) mug on the screen. Shelby was approached to get the necessary cars built for the movie. Shelby called Jim Russell around 3 AM in the morning to offer Russel the project of converting 15-20 F3 chassis into replica BRM’s, Eagles, Ferrari’s, etc. This was possible since it was the very first year of the new 3.0 liter engine formula and the real F1 cars appearances were changing weekly. And yes, it's the same Russell who owns the prestigious European racing school that many top flight F1 drivers graduated from!

And I especially enjoyed Frankenheimer’s story of swaying “Il Commentore” (Enzo Ferrari) to approve of his project. As many know there haven’t been too many realistic racing movies ever made. Just think of “Daze ‘O Blunder” and Driven to begin with...

At the start Enzo told Frankenheimer that not only could he NOT use any of his cars, he couldn’t use the name Ferrari in the movie. After shooting live footage at Monaco, Frankenheimer called Enzo to ask him to reconsider by just watching the 30 minutes he’d put together. Of course Enzo replied that he didn’t have a projector, blah-blah-blah. Frankenheimer replied: Will you watch it Yes or No? Frankenheimer chartered a plane, took movie, projector, AV aides, etc and set it all up in Enzo’s office. According to Frankenheimer after the film finished Enzo “bear” hugged him and said you can have anything. The factory, the race team, the cars, anything...

Garner revealed some interesting aspects of the actual filming. They used a GT-40 as a chase car. And they had a TV inside the cockpit which they could monitor Garner while driving around at speed to see how the shots looked.

They also used the GT-40 as a tow vehicle. They cut off the front of an F3 film car just in front of the windscreen and towed the chassis with driver (Actor) at 140-150mph!

Garner enjoyed bragging about the time while filming at Monte Carlo when Jochen Rindt couldn’t keep up with him. Rindt hadn’t driven the F3 chassis before. Garner meanwhile had taken private driving lessons from Bob Bondurant.

And the scenes from Monza are amazing. Actually all of the in-car footage is quite excellent, yet it’s just so intriguing to watch the little cars circulating around the Monza banking of the long discarded Oval track, and as in another Speed Channel special; The Quick and the Dead, it’s quite odd to hear our national anthem being played for the race winner. Something I’ve never heard since watching Formula 1...

VIDEO: Tribute to Grand Prix, the Movie
Posted by Tomaso at 11:31 AM