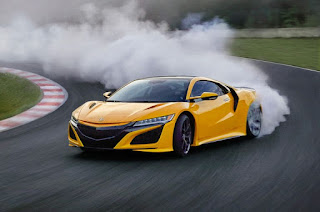 Having just conjured up thoughts of those long ago Monterey Historics, right on cue comes word via Car and Driver that Honda will unleash it's newest Eye-searing colour available for the 2020 Acura NSX, called Indy Yellow none other than during this year's Monterey Car Weeks.

Say Hello to the 2020 Acura NSX in Yellow

As the current second generation NSX seems like it would fit perfectly into the new Hypercar category, since it reportedly features All wheel Drive Hybrid technology, whilst Meyer Shank Racing (MSR) currently campaigns a brace of Acura NSX GT3's in the IMSA Weathertech SportsCar Championship.

As Roger's surely got the wherewithal to pull off running a separate Hypercar WEC effort abroad for Honda. And wouldn't it be funny if Juan Pablo Montoya Beat Alonso to claiming the mythical "Triple Crown" by winning at Le Mans, since Monty's' won two-thirds of this Crown', i.e.; Monaco Grand Prix and the Indianapolis 500; Just Sayin'

2019 Acura NSX review: Drop the Nostalgia and Like It for What It is
Posted by Tomaso at 3:27 PM