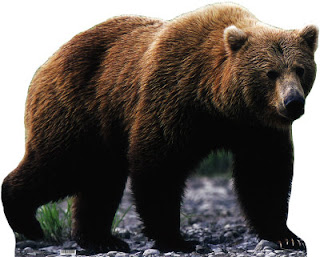 Grizzly Bear image for No Fenders Official Photographer ‘CARPETS who’s apparently become a devoted “GurrRanimal’s LUVer upon this ‘lil ‘BLOB thingy; Hya!
That’s Land ‘O Thee Chrome Horn (L-O-T-C-H) for all of uze Hosers out ‘Thar without your No Fenders “Magically-delicious” Decoder-ring thingy... As so much for the feel good MoJo; NOT – SHEEZ! First time in a zillion year’s I’ve actually sat down to watch a Hockey game, albeit its somewhat karmic that my only ever attended NHL game was to see the ‘KuhNucks play way back when, perhaps a quarter-century ago? Yet, after all it was the BLOODY Stanley Cup Finals Game-6 which apparently the ‘KuhNucks FORGOT to show-up for, eh? Having first been unable to find the game upon le ‘Telie – as suddenly Versus was airing some STUPID Poker match after I’d had the Pre-game on as background noise... Before suffering through a pathetic broadcast on C-BUTT! As they apparently were using some sorta mystical sound system that had NO stable volume – instead weirdly corresponding with the travel up ‘N down the rink along with never ending announcers talking at different pitches before I turned off the game in disgust after watching those ‘KuhNucks fall behind 4-0 – before the first period was over; YIKES!
Having ‘ridden Up North Eh! To Vancouver, BC with Mary Ellen and her two ‘Hoonds after a few most enjoyable Dazes in the bush, i.e.; National Forest – having taken a most enjoyable walkabout Friday upon a completely washed out road which has been partially washed away from the over abundance of precipitation we’ve been having here in the Pacific Northwest – as we’re back to cool weather  between the high-50’s/low-60’s, (deg-f) with Mary Ellen and her FURR-Rocious tandem ‘O ‘Bloodhounds NOT! Leading the way as she spotted multiple fresh Bear droppings; ‘Juan even with some sorta fresh meat (rodent carcass) in it; NO! No Tastes like Chicken jokes here... As I suddenly flashed back to Neil Peart’s wilderness advice in his great book Ghost Rider which inspired my trek to Maryhill - were Thee Rhythm Professor denotes how he takes upon ‘Croonin’ away (badly) to himself upon a walkabout in some potentially Bear infested Woodlands to scare away said critters! But never fear Motorsports seekers; your Humble Scribe didn’t break out into song – especially since I had the two BloodHoonds on-point, except for the time when Mollie simply sat down directly in front of my path to scratch herself; CRIKEYS ‘HOOND! DON’T YUHS KNOW WHO YOU’RE STOPPIN’ IN FRONT OF? Having told our Campground attendant afterwards how I’ve got “BAD EYES!”
But back to some more NON-racin’ blather, eh? As it was funny hearing her friend Pam remark how it’d taken her 2hrs to get home after Game-5, as they’d closed down Granville Street; I guess for the overflowing Hoserz invading the city to watch the game upon multiple Big Screens, eh? As it was even pointed out to Mwah how Boston Bar has been temporarily renamed Vancouver Bar for the duration of play! Thus its now down to the “rubber-match” Wednesday night in Vancouver, where I can only imagine how crazed it’ll be as hopefully the ‘KuhNucks can fulfill their dreams of joining the last two ‘Kuhnadiun squads to win the elusive Stanley Cup after hosting the Winter Olympics, i.e.; Montreal Canadiens (1976-77) and the Calgary Flames. (1988-89)

Then Saturday afternoon on our way to Vancouver to visit a contingent ‘O Hoserz residing Up Above Mwah - Mary Ellen pointed out a sign emblazoned with Langley Quarter Midgets upon it, huh? I thought was on - Stateside; Oh Never Mind! As this previously unknown track locale seemed to be somewheres just before passing Abbotsford, which I know hosts a humongous Air Show every summer, where my friend Yutaka once got extremely sunburned upon his foray to the yearly event which Mary Ellen said; Oh you mean the Abbotsford Arms Bazaar...
Meanwhile, having past said racetrack, I immediately thought of Kevin Lee, whose son is an aspiring Quarter Midget racer... Even if for reasons unknown, Messer Lee cannot pronounce Tomaso – as I’ve spent the past several days making wisecracks ‘bout his butcherin’ of said name; “Tom Aso?”  As I think I’m really turning Japanese; Hya! Although I did indeed purchase my With You Japan T-Shirt during my Saturday turnout at the Worlds Largest Autograph session – which is awaiting hunting ‘N pecking upon ze keyboards as hopefully meeze nucels won’ts gets ins DUH way, eh?
And now its safe to look at ze Internetz, having just watched a most wonderfully chaotic Canadian GP rebroadcast Tuesday morning, albeit I’ve unfortunately learned which marque won at le Circuit de la Sarthe thanks to a most unlikely source – USA Today; Hmm? I thought they only covered Stick ‘N Ball and ‘RASSCAR; Oh Whale, as I’ve hopefully managed to record six ‘N three-quarters hours of selected coverage on Ye Memorex.
Meanwhile, in case you ever feel like making another 3+ hours trip Kevin Lee, here’s the link to the LQMA website;
Langley Quarter Midget Association
Posted by Tomaso at 1:31 PM