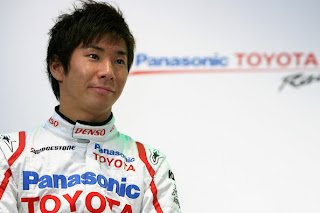 Perhaps you’ve already heard that Toyota’s Test Driver Kamui Kobayashi will once again fill-in for the injured Timo Glock at this weekend’s upcoming inaugural Abu Dabi Grand Prix, as I suspect the team is using this as a further evaluation towards a Full time ride in 2010?

GP Race Debut
Ok, so it was only his very first Formula 1 race ever, albeit the weekend being of a most trying circumstance, a la wet ‘N wooly weather… But I found Toyota new boy Kamui Kobayashi’s performance at Interlagos, a track he’d never driven on before, except for video games and a exploratory “Scooter” outing prior to Free Practice to be very impressive.

Yeah, so it was only Friday, but in the battle of the Japanese Drivers; F1 Debutant Kobayashi outdueled the more experienced Williams-Toyota Kazuki Nakajima, (14th) he also finished ahead of both of the Ferrari’s who languished at the bottom of the time sheets with Raikkonen and Fisichella P18, P20 respectively, while Kobayashi wound-up a fine 13th in his second official outing, having substituted for Timo Glock in Friday Free Practice at Suzuka, which was also held in the rain.

After both Toyota’s had passed thru “Qualie One,” ( Q1) Kamui was lying a very impressive P7 in Qualie Two before Vitantonnio Luzzi stuffed his Force India into the wall on an abysmally wet track, and after a 71min Red Flag delay, Kobayashi got as high as sixth before a last moment spin saw Fernando Alonso snatching tenth in the waning moments of the session, with Kobayashi ultimately ending up 11th; as Raikkonen qualified sixth, Nakajima finished ninth and Fisichella spun out in Q1 and would start dead last. (P20)

But it was the race where Kobayashi put on his best show by holding up none other then eventual 2009 World Champion Jenson Button while driving in sixth place, as ‘JENSE would later report that Kobayashi was driving INSANE! Before the Brit finally overtook him…

As Kobayashi would cycle as high as third place before pit stops would see him come out to tangle with and effectively “Nerf” off track his Japanese rival Kazuki Nakajima who ended up on in the tyre barriers… Yet it was refreshing to see Kamui fight so hard for every place on track as he made a very nice pass upon Fisichella for ninth place in the waning moments of the Brazilian Grand Prix.

So, how will the “Young Lion” fare this weekend? Whale it’s a brand new circuit that nobody’s ever driven on, so I’d guess that Kobayashi could possibly finish in the points, but we’ll see, eh?

Brazilian GP Debrief with Kamui Kobayashi
Posted by Tomaso at 9:00 AM