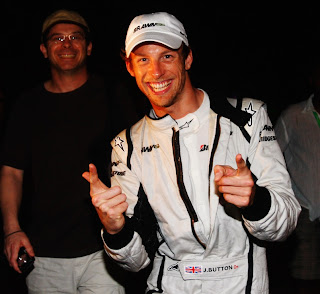 And obviously he likes saying it! As it’s only been a decade in the making, with many bumps ‘N bruises upon the way… As I still fondly recall his rookie campaign with Williams-BMW under the tutelage of Gerhard Berger, losing his Driver’s License for speeding in a BMW Turbo Diesel and professing to like women’s small feet in an F1 Racing interview…

Regardless of how one may feel towards ‘JENSE’s winning of the World Championship, to which he’s taking heavy flak back home Across the Pond for simply “Backing into it…” Nevertheless the BLOODY BRIT did indeed win the MOST races this season, (Six to date) and would have locked up the crown in Singapore if we were utilizing Uncle Bernaughty’s gold medal system.

Yet, has everybody forgotten that 1982 World Champion Keke Rosberg secured his lone title for Williams on the back of a solitary victory at the Swiss Grand Prix (Dihon-Prenois ) while title rivals Rene Arnoux And Alain Prost, (Renault teammates) Niki Lauda and John Watson, (McLaren teammates) and Didier Pironi (Ferrari) all double Keke’s victory total with two wins apiece.

Or Jimmy Clark outscoring 1962 World Champion Graham Hill 4-2 and Jackie Stewart tying Graham’s three victories, yet it was Graham Hill whom clinched his second title in 1968; as yeah, button’s performance certainly dropped off mid-season, compared to title rivals Barrichello, Vettel and Weber, as the “aussie” race winner put it most succinctly.

Mark Webber:“I think he will sleep better now, because he’s been incredibly nervous, there’s no question about that, ” he said. “He’s been absolutely bricking himself the last few weeks, so he can sleep better now.”
And it would be hard to replicate last year’s title fight… But isn’t it ironic that Buttons title was secured in part by current World Champion Hamilton's "Ginzu-knife" tyre slashing on Rubino… Talk about passing the torch, eh?

Button: “The best race of my life”