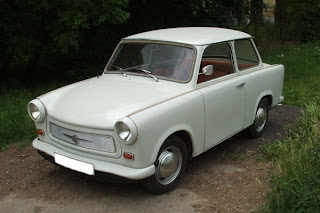 “HOW many workers did it take to build a Trabant?
Two — one to fold and one to paste.”

“How do you double the value of a Trabant?
Fill its gas tank.”

“How do you measure a Trabant’s acceleration?
With a diary.”

So, these are just a few of the jokes that have apparently floated around in regards to the much unloved Trabant over the years. And I’m not sure which is worse? The Yugo or the Trabant, as I’ll leave it up to you to make the call! As for some odd reason, recently the New York Times published a bevy of articles upon the most maligned former Eastern Bloc “People’s Car,” As the Trabant seemingly is a icon of the mostly forgotten Eastern Bloc society, before some ‘Ol Coot demanded that some great wall be torn down...

Where have they gone?

Red Menace
Posted by Tomaso at 9:19 AM