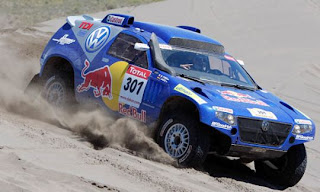 After being cancelled in 2008 due to fears of potential terrorists, the world’s most daunting rally event returns, albeit on a different continent, having moved from Africa to South America.

Having completed their scrutineering checks, the 710 European racing and support vehicles, (approx.) along with Administrative and Media vehicles were prepared to see a massive 820 vehicle armada loaded upon the 'Grande Benelux,' in the Le Havre harbour, on December 1st, in preparations to sail to Zarate, the Argentinean capital, where the remaining competition vehicles will ultimately undergo final scrutineering between December 31 – January 1.

The rally will start and end in Buenos Aires and includes Robby Gordon once again competing under his Team Dakar USA banner aboard his trusty Hummer, soon to possibly be a collector’s item?

And I hope that Robby Gordoun does better then his website... As I was gonna throw in the link to Team Dakar USA, but after twice being serenaded by Safari theme music I had multiple script errors which locked up my confuzer screen, so I gave up!

While the Volkswagen “Works” team armada will flex its muscles as it tries to finally be victorious in this most demanding event, which will see competitors racing from the scorching heat of the South American summer to the frigid heights of the Andes Mountains twice, while trying to unseat the reigning Mitsubishi stalwarts. But don’t expect any TV coverage of the Dakar, which will rampage thru Argentina and Chile January 3-18 stateside, as SPEED is too busy airing mega bloc’s “O Pinks, Unique Whipes and Hot Import Nights...

Dakar Stage 1 report
Posted by Tomaso at 7:37 AM