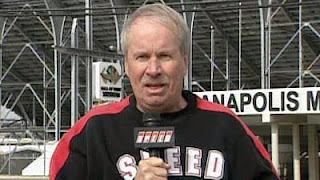 Whale I must say that I feel a bit like a big game hunter... Having previously seen pressdog’s interview with the irrepressible Robin Miller last year, whom apparently Jeff of My Name is IRL is a HUGE FAN ‘O, amongst others... I sought to obtain my own “exclusive” interview from OWR’s leading curmudgeon.

Having sought this interview from Robin, we’ve exchanged several emails regarding the matter, thus some of my questions have become a tad bit dated, but nevertheless here’s what Robin had to say on January 5th, just prior to my going to Arizona to visit this year’s just completed 38th Annual Barrett-Jackson auction.


Tomaso (T)But seriously, one of my favourite parts of your stchick on Dave Despain’s Wind Tunnel show is the segment affectionately known as; HELL Yes or BS! Would you care to play another round here?

T)1. Paul Tracy will have a full time ride in Indy Car next year?

Robin Miller (RM)Not unless AGR or George come to their senses or PT hits the Power Ball. Talked to him yesterday, (Jan. 4) he's got nothing. Very sad, he's 40 and has been worth the price of admission his whole career, he deserves a farewell tour in a good car. My answer: No.

RM: It's got an outside chance but I think Cleveland, Birmingham and a street race in Nashville are the leading contenders. I've received a bunch of email in my weekly Mailbag from Oregon fans who want it back but it's probably going to take a major title sponsor or getting back with the Rose Festival like the good old days.

T)3. Justin Wilson will race for Newman Haas Lanigan in ’09?

RM: Doesn't look like it. Paul Newman and Carl Haas spent their own money the past few years on two cars and it's possible Robert Doornbos could bring a sponsor to be Rahal's teammate but I think Justin has the inside line at Penske.

(Tomaso: Obviously this answer was before Penske announced Will Power’s signing and now the scuttlebutt is that the Hamburgular, a.k.a. Bourdais will return to N/H/L in ’09)
T)
4. Derrick Walker will purchase the assets of Roth Racing and campaign the Mansell Bros. next year in Indy Car?

RM: No and no. Derrick's got plenty of assets, he just needs money and sponsors. The Mansell boys are going sports car racing where they belong.

T)5. Will an “Up ‘N Comer” USAC Silver/Gold Crown Dirt Car driver contest the Indy 500 in the near future?

RM: There's a project going on right now that could get Cole Whitt or Brad Sweet or maybe Tracy Hines to the Indy 500 but I can't talk about it yet because it's a work in progress. I'd love to see Dave Darland or Jerry Coons Jr. get a shot as well but if any of these guys gets a ride it will be a great story and a long shot.

RM: I said it was coming back in 2009 so what do I know? But, yes, I think it will be back, proving Bernie and Max haven't run everybody off by then.

RM: You'll see Audi join Honda but not Porsche and maybe Alfa. At least that's what I've been reporting for the past couple months.

RM: If he gets Hewlet Packard as his sponsor again, yes.

RM: I think she can but it's going to have to be an oval.

T) And speaking’ of Ye ‘Ol Windbag, a.k.a. Dave Despain, besides getting his coffee, how long have you known him; and any funny Despain stories to share?

RM: I met Dave in the late '60s when he was the AMA PR man and I was covering the motorcycles on the Mile at the Fairgrounds. I guess my best story is when he was trying to make it as a flat tracker and they were at DuQuoin one day. It was real rough and dusty and Gene Romero, the national champion, told the officials he wasn't going to go out and bust his ass getting the track in shape. He pointed to Despain and said: "Send out the novices, they don't know any different." He still laughs about that.

T) “VUKIE” called Castroneves, Hulio... Which I’m sure is NOT new. Besides Hulio, Princess and Graham Rahal, what other “Big” name potential Indy Car stars do you see on the horizon?

RM: I think Ryan Hunter-Reay given a good car and maybe somebody like a Jonathan Summerton if somebody gives him a chance. Derek Daly's kid obviously has a world of potential and he's an American just like Summerton.

T) You mentioned how if ‘Ol PT doesn’t race in Canada next year, Toronto will have a hard time selling tickets. But Tracy’s getting a bit long in the tooth and “TAG:” (Alex Tagliani) isn’t exactly a spring chicken, while Andrew Ranger was given the boot. Does Canada have any future Open Wheel talent on the horizon?

RM: Not sure about any young Canadians but PT showed last year at Vancouver (Edmonton) he can still peddle and Tags also turned in some dandy runs. Ranger had plenty of potential but no backing.

T) What do you think about Robert Wickens, James Hinchcliffe and Kevin Lacroix, along with John Edwards, Alexander Rossi, Josef Newgarden, and Connor Daily? Will any of them wind-up in IndyCars?

RM: Like I said earlier, you would hope some of these kids get rides but Alex Lloyd, Jay Howard and Jonathan Bomarito all have talent and nobody is knocking down their door.

T) Do you think Formula Atlantic, nee Toyota Atlantics should be absorbed into the Indy Lights series?

RM: No, I think they should run together at the IRL races just like they did in CART's heydays.

T) What do you think about the current crop of females in the Indy Lights Championship; Ana Beatriz, Cyndi Allemann and Christina Orr, along with newcomer Pippa Mann?

RM: Beatriz seems to have some ability and she made some nifty passes last year, on ovals and road courses. Don't know much about the others.

T) Do you think “Bia” (Beatriz) can win the 2009 Indy Lights title and when will Ana make her debut in an Indy Car?

RM: If Andre Ribeiro (her agent and former Penske driver) can find her money, sure.

T) Was your start in 1969 at the Indy Star newspaper your very first professional Journalism job, or had you done something similar previous? How did you get your start in Journalism?

RM: I was 18 and answering the score phones at The Star when a couple guys got drunk on their lunch hour and didn't come back to take the football games. I begged the sports editor to let me help and he really didn't have any other alternatives. So I took some games on the phone and never left the sports department for 33 years until the Gannett Nazis took over.

T) I read that you think the Indy Star is the last place to go for any worthwhile motorsports news, yet you began your career there and stayed for over three decades... So there must have been something worthwhile besides the free Indy 500 tickets?

RM: I hired Curt Cavin in the mid-80s because he was enthusiastic and hungry and wanted to learn about motorsports. But I'm afraid he's gotten real lazy in the past few years and Steve Ballard is a nice guy and a good feature writer but between the two of them the only real story they've broken in the last few years was unification in 2005. Oh yeah, it didn't happen then did it? What bothers me is that their Friday notebook is nothing more than a lot of press releases and seldom to they use it to tell us anything we don't already know.

T) Although you claim to mostly shy away from Blogs, albeit Press Dog, do you think that blogging is a viable way to garner a new, youthful, potential Open Wheel Racing fan base?

RM: Hell I don't know, I just think the internet and blogs in general have ruined reporting and journalism.

T) In closing, I’d really like to thank you for granting me this (long winded) interview, is there anything else you’d like to say?

RM: Thank god I got to be on Indy 500 crews in the '70s and race USAC midgets and stooge for Jim Hurtubise and watch Parnelli, AJ, JR and Mario in the '60s. And thank god for Dick Wallen's videos so I can always watch racing when it meant something. And I'm thankful I got to cover Indy in those days when it meant something to make the race...
Posted by Tomaso at 8:25 AM