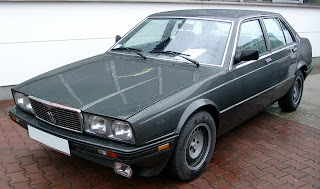 NO Comments from the peanut gallery... As for some strange reason, I’ve always liked this car... Perhaps because it’s Italian, much unloved and lambasted by the motoring press? Hmm? In that case, I’m assuming that there’s plenty ‘O space for FIAT here, eh? What did that stand for once again? Oh Yeah! Fix It Again Tony...

1984 Maserati Biturbo
"Biturbo" is, of course, Italian for "expensive junk." At least, it is now, after Maserati tried to pass off this bitter heartbreak-on-wheels as a proper grand touring sedan. The Biturbo was the product of a desperate, under-funded company circling the drain of bankruptcy, and it shows. Everything that could leak, burn, snap or rupture did so with the regularity of the Anvil Chorus. The collected service advisories would look like the Gutenberg Bible. The only greater ignominy was the early 1990s Maserati TC, a version of the Chrysler Le Baron (a flaccid, front-drive, four-cylinder loser-mobile) with the proud Mazzer Trident on the nose. Finally, sir, have you no shame?”

Then again, its hard to believe that its almost a quarter of a century now, that this much maligned chariot first arrived, since its also the same year as one of my all time favourite Ferrari’s was launched... Better known as the 288 GTO!

Thus, while hunting for trivia upon the source of this story, i.e.; the Maserati Biturbo, I ran across the following link, which I’ll leave it up to you to decide whether or not this list is all it’s kracked-up to be?

50 Worst Cars of All Time

UPDATE
WOW! Even some hot shot whipper snapper named Tanner Foust has just been seen on a re-run of SPEED’s Supercars Exposed throwin’ down on the much maligned Mauser Biturbo; calling it Maserati’s ugliest car and then making fun of it, as a warmed over Rosso Biturbo is seen first being crushed and then grinded up into tiny recyclable bits at a junkyard. OUCH!

Who is Tanner Foust?
Posted by Tomaso at 9:23 AM