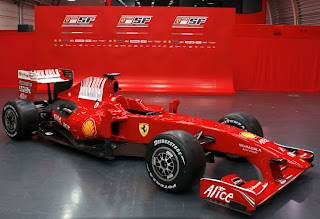 Scuderia Ferrari Marlboro has once again beaten their Formula 1 brethren to the punch in the spate of upcoming 2009 F1 launches, when the team debuted the F60 at Mugello on January 12th, as the launch was originally intended for Fiorano, which was blanketed in snow.

Felipe Massa was given the honours of taking the F60 out for its debut laps, as Ferrari has chosen to christen its 2009 challenger the F60, in deference to its continuous 60yrs of participating in the modern F1 Championship.

Massa was quoted as saying it reminded him of an F3 chassis as the racecar is much more diminutive then the previous F2008...

F60 Technical Specs
Posted by Tomaso at 8:33 AM