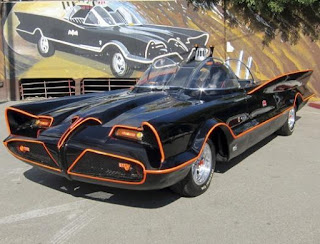 Was all I could think of as I’d magically managed to tune-in “Justin-time” to see the most revered Batmobile go up for auction live on SPEED last Saturday night, actually having tuned-in ‘bout a half hour before the B-I-G event occurred...

Holy Crowd Hysteria Batman! As there was absolute pandemonium over the No. 1 original Batmobile owned by the renowned 87yr old car customizer George Barris going under the hammer - with lead auctioneer Tom “Spanky” Assiter whipping the bidders into a frenzy, along with the usual C’mon, give us more money pitches by the Barrett-Jackson lead cronies, as I felt somewhat sorry for the Shelby Mustang preceding I-T! Although #5036 didn’t do to shabby, bringing a whopping $225,000!

And from my hurriedly scribbled notes - I jotted down the following, as so much for the fiscal cliff we’re all peering down, eh? As what economic recession? I mean Holy Greenbacks Batman! As I watched some Italian concept car hammered away for a cool $1.25-million prior to the Super Saturday’s star take center stage.

And at first the throng of admirers upon the stage were so stout, they could barely get the 19-foot creation affectionately known as  the real McCoy - Batmobile No. 1 on stage as everybody wanted their picture taken with it, as SPEED’s Mike Joy claimed the crowd was 15-deep; WOW! And they played the iconic Batman theme music as the car was finally presented on stage - with even Miss Hurst Shifter Linda Vaughn replete in Cat Woman costume; MEOW! Although I’d still haveda say that Michelle Pfeiffer was the best Catwoman of all; but I digress...

And even ‘Ol ‘Spanky - Barrett-Jackson’s lead auctioneer got into the act by saying BAM! KA-POW! BIFF! Each time a new bidder raised his paddle, even stopping once and asking the entire crowd to sing Nana-Nana-Nana-Nana Batman! As the final bidding apparently went down between two gentlemen, as Bob Varsha said into the Telescreen: Wait a minute, what’s this? A coin toss to decide who’ll win the car? As 56yr old Rick Champagne, a logistics officer from Arizona was the winning bidder - and proudly claimed he’d had absolutely NO doubts the car was his tonight! And he’d be putting it in his living room;

Batmobile sold at Auction for $4.62-million

Thus I’d say that Mr. Barris made out pretty darn good, having originally paid Ford Motor Company’s Lee Iacocca $1 for the concept car! As I found it funny that I’d happened to drop into SPEED twice, the first time seeing Ralph Sheheen interviewing Barris and pleading for his chance to sit in the Bat car, which Ralph got to do live on the ‘Telie, as it was fun hearing the excitement in his voice... Then this was followed up by the genuine surprise of Varsha telling us he’d been pooh-poohing all of this nonsensical hypefest over the Batmobile as he was truly shocked over the car’s ‘legendous status and the spasmodic response the auction had brought, by saying he needed to apologize! As I also enjoyed hearing the disbelief in his voice over what just happened?

And the hits just kept on rolling on afterwards, as the next car after the din finally subsided was a 1957 Factory Supercharged Ford Skyliner that brought a ‘Mega $300k, to which Varsha quipped surely is a record for a skyliner?

Then there was some Dude named Rick Hendrick successfully winning three cars in-a-row; the first being the most successfully campaigned L88 Corvette road racer, which he nabbed for a cool million. Next he snapped up the rights to the number one production 2014 Corvette C7, with the all important serial number ending in 0001 - for just a tick north of $1.0m. And finally he grabbed a big block Camaro, think it was a ’67/69 Drag Car? Was still reeling over Ricky-boy having just shilled out $2.05-million for two ‘Vette’s and didn’t get the scoop upon the latter Camaro...

These were followed by a trio of ‘Stangs, as first up was a 1968 Shelby KR500 convertible that went for a low-low $130k, followed by a custom ’65 Mustang with 427cid V-8 pumping out an astounding 740bhp! That went for over $200k! And was followed up by a ’07 Shelby Mustang that had been widened by four inches and only had a scant 630bhp on tap and sold for a relative bargain of $70,000 - as A-L-L of these multiple zeros were too much to take and thus I turned off the ‘Boob-tube whilst still marveling over just having seen the iconic Batmobile being sold...
Posted by Tomaso at 12:33 PM