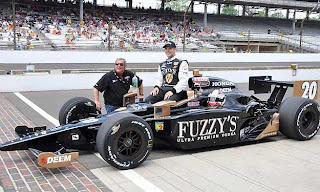 Y’all are already most likely ahead on this... As I learned whilst in the Wonderer State, that the ever continuing musical roulette ‘O Indy Car Drivers continued this weekend with the additions of Mr. Chrome Horn ‘N The Graminator... The Wiley ‘Ol PT & Graham Rahal respectively, as Paul Tracy will return to Dreyer & Reinbold for his second stint this year, while Graham returned for his second stint at Sarah Fisher Racing; as for some strange reason I thought he had a 6-race deal with Newman Haas Racing?

For Paul Tracy, making his pitch now part of the game
And speakin’ of Seconds, Tomas “Rockem-Sockem” Scheckter made his second start this year for Conquest Racing aboard the No. 36 before giving way to Roger Yasukawa in Motegi. Meanwhile Ed Carpenter, who returned to the Indy Car Series as a second entry at Panther Racing, is in the midst of his 3-race extension after having been on the sidelines since May, having returned at Chicagoland – where he ran up front for awhile before Pit lane problems set in...

And having NOT watched the Belgian GP, I sat down to a mini-F1 marathon of Practice, Qualifying and Race all in ‘Juan sitting and therefore missed out upon the Kentucky ICS ‘Qualie session. Thus I was extremely happy to learn late Friday night that Ed “Fuzzy Wuzzy” Carpenter had scored his inaugural Indy Car Pole Position ahead of Will Power, Dan Wheldon, Scott Dixon and Hideki Mutoh rounding out the Top-5.

And it was funny listening to an AP story claiming how Will Power has joked about how every time he see’s Dario “REO Speedwagon” Franchitti in his rear view mirrors, he hears the theme music from Jaws! While Paul Tracy (214.270mph) starting 23rd was just able to hold off The Wanderin’ Milka, (24th) by 0.927mph, as Messer’s Rahal, ‘TK – “Follow your Schnoz” (Kanaan) and Ryan “The IZOD Dude” Hunter-Reay were ALL “SLOWER then Milka Duno’s 213.343mph 2-lap qualifying average.

Raceday
Then the unthinkable happened... I dialed-up the Indy Lights race via le internets on the very first try... And viola! I gots to listens to the ENTIRE IMS Radio Networks Broadcast Flag-to-Flag without any interruptions... As Pippa Mann led Wire-to-Wire over the Mayor of Hingetown, nee James Hinchcliffe and J.K. Vernay, who effectively locked-up the 2010 Firestone Indy Lights Crown and must simply take the Green flag in Homestead to collect his title.

Meanwhile the Pride of BHA (Brian Herta Autosports) Sebastian Saavedra, whom the Team seemingly planned to build itself around for its future endeavours into the BIG ‘BOYZ ranks, nee Indy Car... Inexplicably QUIT the Team on Saturday, prior to the race... Which quickly substituted Daniel Herrington, who’s Day Job is Race Spotter, as he’d pull Double-Duty Saturday evening.

Yet ironically both of the BHA cars; the No. 28 of Stefan Wilson & No. 29 of Herrington were both involved in a Lap 2 3-car crash with Phillip Major which eliminated all three competitors and caused a Red flag to be thrown.

And thanks to the IMS Radio Network Broadcast, I was able to learn that there would be another agonizing 50min Versus TV Preamble... Which I’ll SKIP! So thanks for tellin’ meeze Kevin Lee... As hopefully I’ll manage to stay awake during the whole race? As even better yet, I’d be happy to see ‘Ol Fuzzy Wuzzy become a first time winner with Power in P2... Whale I’d certainly hoped so! As do NOT even get me started on Danny Boy “Spike” Wheldon’s DISGUSTING sponsor... URGH!

Not to mention HULIO ‘N Team Penske employing the Danica-FO-Mannica Motegi Fuel Starvation Diet in order to pull out an improvable victory... With Carpenter finishing runner-up the second year in-a-row, with Mr. Proud (Wheldon) third, as Franchitti once again finished ahead of Power, who’s Points lead shrank to a paltry 17; SHEISA!

Chassis-Chassis, On the Wall...
So I must admit, that I haven’t read the whole Pop Off Valve story ‘bout the impending ICS Car Owner revolt which was originally stirred-up by none other then the mercurial Robin Miller...

Yet even Don Kay brought it up Tuesday night during his Autosport Radio Show, which I’ve since read that Randy Bernard & Dennis Reinbold held court to clear the air upon this... While Mr. Bernard missed his first Indy Car race while in Europe hoping to drum-up interest in the 2012 Chassis package by talking to Ferrari, Cosworth, McLaren, etc. YUK! A Body-by-McLaren IndyCar... By Mennen! Oh Never Mind...

Uh Randy, couldn’t you just have talked to Kevin (Kalkhoven) Trackside and dropped by Gerry (Forsythe) when at Chicagoland? As Y’all really don’t think Ferrari is gonna stoop so low and build engines do Yuhs? Although I still say everybody is overlooking the Roush/Yates Six-banger just developed for the American Le Mans Series...

TelevisionAnd the Beauty of being one of the members of the Bloggaratzi is that I get the chance to disagree with other Scribes out there in Bloggerland... As much as I enjoy George’s writing, I was instantly On Alert since I already knew he was a “Lifelong” Penske Fan – now having learned he’s also an HULIO Supporter; ACK! Thus I expected his Kentucky thoughts would be somewhat Biased, eh?

But as I mentioned before, I do NOT enjoy versus’s overly LONG WINDED... Hmm? I think this story’s getting there too, right? Err, as I said, I DON’T watch the Preamble, ‘cause it makes my head HURT to listen to ‘LyndieCar DRONE ON ‘N ON! (Thus I enjoyed George’s assessments of her Pit reporting...) And I’m sure it’s just me; BUTT! I found the Race coverage to be excessively ANNOYING... As the word SPURTS immediately came to mind as there was a NON-STOP interruption of COMMERCIALS; SHEISA! In fact it got so bad that I decided to time the closing stages of the race and scribbled the following.

As I tells Yuhs; if it weren’t for Bob Jenkins & Jon Beekhuis in the booth, whale Robbie Buhl’s Ok too, I probably would have tried listening to it Online instead! I mean where did Paul Tracy finish, eh? Did I miss the Announcers talking ‘bout that?

YIKES! Now I'd better go outside before the rain comes...
Posted by Tomaso at 12:02 PM