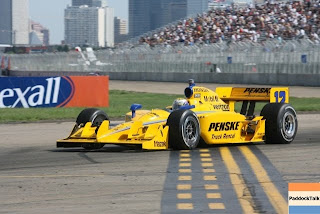 As I was waiting ALL day long
(SATURDAY)
For it to become DARK outside...

My “Auntie” Harriet asked me again
What time does that Grand Prix race begin?
And where are those Formula One Carz racing at?
And then she asked me again
Do you know what time that race thingy begins?
(And where is Motegi?)

Oh, do you mean the Grand Prix of Motegi?
And I asked is that Motegi, New York, Indy or West Coast time
Yuhs wanna know?
BUTT does it really matter what time it is
At the Twin Rings ‘O Motegi?
As I noticed there's another
DannaWho? BARF! (AP) story
In the Minneapolis Star Thursday...
About her MOST Fortuitous victory of ‘08
So I DON'T really care
What time it is in Motegi...
(But it’s getting’ darker outside...
Which means its getting somewhat closer to Preamble time!)

HELL!
Even Kurt Cavin sez a different starting time
Then indycar.com... (And Versus)
Unless the race doesn't really begin 'til 12-midnight ET?

So do Y’all know what time the race ends?
As I sat down alongside my nearly 91-years young ‘Aunty Harriet to watch something I rarely ever due; the overly ANNOYING Versus Indy Car Central Preamble Show... Of which everyone paying mild attention to the Telescreen began getting overly fidgety ‘bout... As I became MOST anxious for the BLOODY F%%KING race to begin!

As you’ve gotta be joking – right? For probably only the second time ever, as I wasn’t in charge of the clicker, I actually listened to a DannaWho interview... As she blathered on ‘bout how big her Twin Ring ’08 Motegi trophy was, sayin’ mine’s Bigger... YIKES! And she was really happy ‘bout gettin’ a Japanese Starbucks travel mug and whether or not she was going to keep the Hello Kitty blanket she’d received in return for her Autograph... As apparently the Japanese custom is to give the requested Celebrity a “Presento” in return for their “John Hancock.”

But I did enjoy the ‘TK “follow-your-Schnoz” (Kanaan) piece; even if it was overacted... As I was very happy to see that he had a Greg Moore crash-bucket proudly displayed in his Helmet collection, along with “Rubino,” (Barrichello) Herta, “Mikey,” (Andretti) Dario, etc, on display and not tucked away inside a desk drawer...

Thus the three Amigos stayed up ‘til 9:30-9:45PM (Seattle time) ‘Cause meeze ‘Aunties needed her slumber before getting up early in order to go to Saint Rita’s to hear Father (la) Sacco the next morning. Telling aunty Harriet don’t forget that when you PEAK, you WIN! YUK!!!

Thus I fitfully drifted off feeling somewhat “Gutted” and DISAPOINTED ‘bout Will Power’s outcome as he’d fallen to P9 with that BLASTED “REO Speedwagon” (Dario Franchitti) in third; SHEISA! Having over anticipated the ensuing yellow caused by Alex “Royd’s” mysterious stoppage...

Thus, in case Y’all don’t know I’m roootin’ for the “Toowoomba Toranadoe” ‘N Webber Mate to do the ‘aussie Double this year and sweep the Indy Car & F1 table with Will Power & Mark Webber being crowned the Champions of their respective series...

Having been aware of Power’s talent during his Champ Car days, as he & The Hamburgular (Bourdais) seemed to be two thorns in Justin ‘BIG UNIT Wilson’s side... I’d always been somewhat a Fan of his... But that all changed that Lucky day back in May 2009 when I was most fortunate to be introduced via Danny B, as Will was wandering alone thru the Hall of Fame museum and he was most gracious with Mwah, just the Humble Scribe of some miniscule Open Wheel Racing Blog, even going so far as to shake my hand! (And thus another FAN was born!)

But I haveda say I’m getting somewhat nervous over Power’s fading chances as Franchitti first trimmed his 59 point lead to 23, then 17 and now what? As I spent all day Sunday NOT wanting to know the results ‘cause I’m taping the race on the trusty ‘Ol VCR... So I’ll watch it whenever I get home, right? HA-HA-HA! Jokes on me...

As back to the Memorex, watching it back all the way up to where we’d called it an evening – somewhat early Saturday night... Just another commercial break after Mario ‘M & M Moraes’s hard crash against the Safer barrier...

As I just kept chanting loudly at the Telescreen C’MON POWER! C’MON WILL! GET UP THERE!

As it was a most humbling experience to haveda be rootin’ for HULIO; ACK! And Ryan “Disco Inferno” Briscoe to win the race and run in a Penske Roadtrain 1-2 formation to takeaway points from Dario; Aye Karumba! As I had to pull for Castroneves the whole evening, Err race, eh?

Returning home Sunday evening there was a message awaiting me, as Mary Ellen informed me that I’d left my coat down south; CRIKEYS! As she said to call her as soon as I knew the results of the race; and thus this morning I began watching le Memorex with fingers crossed that Will Power would get back up front and even possibly pass Dario? As I didn’t expect him to win, but a Podium sure would be nice!

As Bob Jenkins spent considerable time discussing Anthony Foyt IV & Casey Irsay’s baby arrival during a lengthy yellow flag period with even Robbie Buhl getting into the act by sayin' that makes "Quattro" a Colts fan... And even Mr. BRUT Arute-Arute (Jack) jumped on the BabyTrain with another of his stirring "Human interest pieces 'bout the Japanese Teenage fan who took 'Quattro to an ATM machine back in '03 and is a big time friend of the Foyt's now & was even working with the team this weekend...

As I’m left wanderin’ if all this homage to the Foyt’s had anything to do with the A.J. Foyt Oval(teane) Cup being awarded in Japan... As ‘Ol Super Tex AIN’T going abroad for some silly Open Wheel race; Yuhs Hear!

And Oh-My-GAWD!!! DannaWho finished 5th as they talked incessantly 'bout her ALL race long... She could win it again... May be? Where’s she now? Roll the Marty “Nationwide” Reid Battle Cry: “Move over Boyz, the Ladies coming thru!” As we’re gonna MILK the SHIT outta this glorious victory Coup d'état ‘O ‘Danicker’s Yuhs hear??? SHEISA! As I’d swear I almost thought I was watchin’ an ABC IRL DannaWho? ‘LUV-Fest-athon Broadcast... As all we were missing was Brent ‘Muss-burger’s foaming over Danica; Oh Never Mind!

At least Professor Jon Bekhuis gave “Simona-Simona” (De Silvestro) a Shout-out as the Minnowesqe HVM Racing Team was forced to go to their third chassis of the season after Simona got walloped by Vitor Meira at Kentucky... And Hey! Milkalicious gained the most positions (6) at the beginning of the race...

As all I could do was laugh out LOUD as while I’d been talkin’ to the TV; C’mon, throw the DAMN Green flag! Nervously watchin' the tape that inexplicably cut off short with 12-laps remaining; WTF!!! As for reasons unknown I’d set the recordin’ device to end exactly at, let’s see carry the 5, multiply by 3, add 16hrs + 3, then subtract 19 hours for Seattle Time... Err I’d ASS-sumed that Versus broadcast would end at 2AM NY/ET/Indy time... Or 11PM Seattle time; BUTT NOOOOOOO!!!!!!!!!!! It went LONG! Somme-thun to dooze with all ‘Dem yellows? (Or was it ‘Dat overly LONG Preamble Hypefest?) And thus I still didn’t know who’d won the DARN BLASTED THINGY! Having to resort to zi internetz...

Thus reporting in, I told Mary Ellen how although I didn’t think it meant a DAMN THING! Nevertheless I was pleasantly surprised to hear Bob Jenkins report that 37% of their Poll thought Will Power should win the Title over Dario’s 27% as she said who’s the other 36%? Whale I’m guessing its HULIO Fans? Although I believe he’s mathematically eliminated now; as he’s 86 points adrift and there’s only a maximum of 53 left... Whale, you’d better go back and find out if it was “Should win or will win?” To which I’ve now gone back and painfully fast forwarded thru my 2hrs ‘O tape (-1hr Pre-race) to learn that 37% think Will Power is going-to-win the Championship.

As I’d like to have heard the Post-race interviews where apparently Will told Dario he was gonna kick his ARSE! To which Franchitti replied; Bring it! As HULIO dominated the entire race, winning comfortably ahead of Franchitti, with Power third, Briscoe fourth and Danica rounding out the Top-5. As we go to Homestead, Miami in a Fortnight to decide the 2010 Indy Car Series Title which Will Power leads by a narrow 12 points...