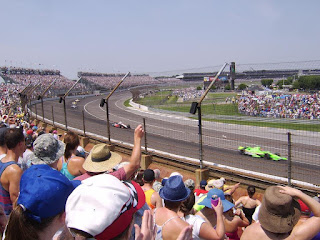 
By now, if you're one of the many Diehard KuhNucks' who follows IndyCar racing passionately! Then Y'all know how you were seriously Hosed this Winter by Homan & Company's "New & Improved" International TV Package.

As one IndyCar Staffer said, we just thought we could call our Television Partner Up North Eh! Any bloody time we wanted to, and they'd be very happy to continue promoting our excellent Open Wheel Racing Sports product. Especially since Canadians  are so G-Damn Polite!

Yet unfortunately, when we tried connecting with our usual contacts at Rogers Communications, we were first informed He was Out of the Office Ice Fishing, so we attempted speaking with his Associates.

Next we tried getting ahold of this Norm McDonald fellow, who we'd originally surmised would be an excellent Media contact, due to his previously being a News Anchor on the Award Winning SLN TV Show. And he seems to have a firm grasp upon the Kuhnaidiun' motor racing landscape.

As we here at IndyCar take great Offense to being Blamed for the current lack of Indy Cars being televised in Thee Great White North! As our hands were simply tied, and we've been doing our utmost to rectify the situation ever since.

Holman & Co., along with IndyCar takes great pride in providing TV Coverage to our valued Northern audience, and have done so ever since the first Canadian Hall of Fame racer Eldon Rasmussen has participated at The Indianapolis Motor Speedway.

Nonetheless, I'm pleased to announce that beginning with the Chevrolet Grand Prix Dual in Detroit, which after all, the "Motor City's" linked to Canada. And we feel is a natural tie-in with our New Television Partner. I'm pleased to announce that from Detroit onwards, Canadians will be able to view IndyCar upon our New Northern Home's provider CBUT, said Holman & Company CEO Mark Miles.

CBUT will provide coverage of All races either live or in Same Day HD format, with the exception of the Indianapolis 500 and the Toronto Grand Prix presented by Labatt's, which unfortunately are already contractually obligated to Rodgers Communications.

And like our Award Winning NBC Gold Pass in the lower 48 States, which we're currently working to make available in Alaska and Hawaii. Canadian Motorsports Fans will be able to purchase CBUT Silver for a very reasonable $69.86Cdn to view All remaining 2019 IndyCar Series Practice and Qualifying sessions live.

Or Canadians can purchase CBUT Silver+ (plus) for only $99.99Cdn, which will not only enable viewers to watch every remaining IndyCar practice and qualifying live, but also allow access to our vast video archives and relive All of the races they've previously missed!

And Fear Not Oh KanaDuh', we're not trying to imply any inferiority by making your country's Pay TV Package Silver vs. ours being Gold. Instead our Marketing Department assured me that Canadians are very passionate over the colour Silver, which after all is the colour of your beloved Stanley Cup.

And we sincerely hope this will rectify the current plight of Indy Cars Not being readily available to our Canadian Fans, who we value their loyalty to the sport greatly. Which is why we're bringing back Scott Goodyear as the lead expert Driver Analyst of CBUT's independent Pre-race Announce Crew.

While we're very pleased to announce that Norm McDonald will be our CBUT lead announcer alongside Indianapolis 500 runner-up Scott Goodyear during these Canadian Only Pre and Post race analysis shows.

Therefore, with our renewed focus upon providing affordable, quality products and service to our loyal Canadian Market, as we'll also be utilizing KanaDuhs' very own James Hinchcliffe to activate our new CBUT partnership, hopefully this will bring an end to the few complaints we've received previously over Canadian TV Programming...

(Photos c/o No Fenders ‘Offical Photographer CARPETS')
Posted by Tomaso at 8:58 AM