First 'N Foremost, I must say how fortunate I feel that Tacoma Bureau Chief Mary Ellen is so willing to drive me to & fro, Drag-me about 'N read me the various signage of various automobiles, memorabilia, etc that I inquire 'bout during our semi-frequent visits to LeMay America's Car Museum in Tacoma, WA!

As two-third's of my remaining three readers would say; Hya! I'm loosin' I-T! Having desired a tranquil "Get-away" from my frumpy 'lil Abode in Nofendersville down to Tacoma to get my "Doggie Fix!" For which Cheryl, my wonderful grocery shopping assistant told Mwah, she'd gotten her's fixed years ago; Hooah! Before running off to Mother Speedway for some 'lil 'Ol 500-miler Oval race...

Thus, it seems highly appropriate that upon the day that the vaunted "Super Saturday" (first day of) qualifying at Mother Speedway was  getting rained out this year, your humble No Fenders scribe would be visiting my Numero Uno Pacific Northwest museum in Tacoma, WA instead, simply known as America's Car Museum! Having last visited ACM for thy Pony Car O'Rama, which I scribbled 'bout in;

As it was what felt like a typical fall day here, albeit that bright, nebulous, bulb in thy sky, ergo the Sun was out, with a day's high of 62/63deg-f (Fahrenheit) and low of 50/51 reported, with the wind Ah-blowin! Whilst Indianapolis was obscounced in Seattle-like weather the entire day, ergo RAIN; but I digress...

Entering the museum Mary Ellen asked what I wanted to S-E-E? Which made me think of a recent trek down to Tacoma on the bus where I offered to give a lady trip directions since she was transferring to my same Tacoma-bound bus who instantly retorted: But you're NOT sighted! As I sat in front with my white  cane... While I heard 'Ol Jerry Lewis SCREAMING Hey Lady; Hya!

As I'd primarily wanted to visit the Route 66 display I'd read about in my most recent ACM email, while I've now realized that the museum was awash in its own version of Americana - after one of the many affable ACM Volunteers had told us the best way to view the museum was to head down the middle of the main floor, awash in its Ford F-150 collection that  replaced the Mustang Pony Cars exhibit, and take the ramps to the left down to the bottom level and then wind our ways back topside along the right side ramps.

As the word Americana sprang to mind after noting the Ford F-150 Pickup exhibit, Station wagons, Route 66 and NASCAR Pioneers all on display, id DON'T get much more Red, White 'N Blue  than that, right?

Starting our way down after having blown past the Feurd' PickemUp trucks and several old classics, i.e.; a Packard touring car who's wood spoke rims jumped out at Mwah, along with the whole car due to its overall girth, and a honest-to-goodness "Woody" station wagon, etc, we passed thru a Lotus display. Stopping briefly as a white Sports Car popped out at my retina's, I asked Mary Ellen, is that a Lotus Europa? BINGO! As she said I'd correctly identified the two seater Loti, then asking what's in the back? To which I retorted the engine, and the front's the bonnet for packing your picnic basket; Hooah!

Working our way downwards, we passed thru the Alternative Technology exhibit, which always "PEAKS" Uhm, NO Danica quip 'bout when uze Peak, uze Wins! Jokes here; Hya! Peaked my curiosity, as Mary Ellen read a sobering statistic, for which I'm not entirely sure I've quoted correctly? As she noted: The USA "Guzzles" 350 Million gallons of Gasoline daily! Which equals 40% of world's production; Me Thinks...

As I did learn according to a U.S. Government website that in 2014 19.05million Barrels total petroleum products were used daily, which includes all forms of petroleum, including bio-diesel, etc. Which equals the staggering total of 800.1 million gallons per day! (Oil Barrel = 42 U.S. Gallons) With an obscene total usage of 6.95 billion barrels having been devoured by the good 'Ol United States 'O Americre' last year; SHEISA!

Then before we turned for our destination, Mary Ellen said what's going on over there? As she went to check it out and reported that they're giving free rides around the parking lot in a few of the museum's cars - including my favourite American marque, a Ford Mustang! As they're just waiting for drivers to arrive, you'd better do I-T Tomaso!

thus, quite unexpectedly, I found myself in the hands of two very friendly Volunteers leading me outside, guiding me up six stairs to my awaiting chariot, for which I was promptly assisted into the "Horseless Carriages" rear seat after stepping upon its running board!

Alas, I found myself being chauffeured alone by Bruce in a 1926 Ford Model T Touring Car, which was so DAMN kOOL! As I never imagined in my life I'd get to ride in one of Henry Ford's iconic Model T's, which was the catalyst for America's love of the automobile.

Bruce asked me if I knew anythingy' about Model T's; Nope, other than they're Henry Ford's earliest creation. Thus he told me that this particular example had a four cylinder 'lump puting out a staggering 20-horsepower and had a "Planetary" two-speed transmission. Telling me they were basically drive bands that were slipped 'N spun to motivate the vehicle's travel.

Bruce said he'd previously owned a 1910 Model T, for which the '26's engine would be interchangeable with, but he'd sold it and now had a late 1950's (1959?) VW Beatle instead as we chug-chugged our way around the parking lot for a second time before coming to a stop, where Mary Ellen greeted Mwah and said: He's a Mustang Guy, so he needs to ride in the Mustang behind!

For which Mary Ellen joined Mwah, as we got into a Oh So SWEET sounding 1965 Mustang convertible with the Cat-like purring, burbling horsepower desired 289cid V-8 small block motor!

As I'm told this is only the second year they've given rides to museum visitors, and Bruce said they only do it four times a year during summer, so that was just total luck of the Automobile Gods smiling upon us...

Route 66 and Station Wagons Galore...
And although it's not the original, or the version I've heard over the radio in years past, nevertheless, I prefer Depeche Mode's version of the classic "Get Your Kicks on Route 66" song...

VIDEO: Get Your Kicks on Route 66 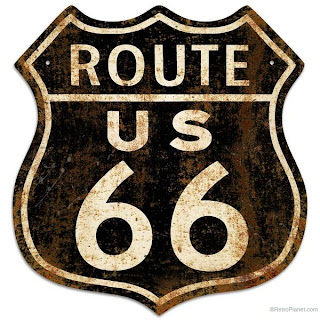 For which other than knowing of its name, I know very little 'bout America's first paved Highway, which full Coast-to-Coast paving was completed in 1938.

US Route 66, which like the song sez', went from Chicago, Illinois to Santa Monica, California, spanning some 2,450 miles and was the major transportation venue for traveling to the West Coast.

After much controversy upon what its name would be, the famous Route 66 was established in November, 1926 and was decommissioned in June, 1985 before being established as a historic highway route in the late 1980's, when a National Historic Association was formed, with Bill Clinton signing into law a matching funding act for its preservation.

Interestingly, its Route 66 which spurred the development of today's modern Gas Station, as "Service Station's" are largely missing from today's landscape, with travelers then clamouring for something more inspiring than just the odd gasoline pumps next to a non-descript ram-shamble shack!

Also, the advent of today's Fast Food restaurants were born out of needing to feed America's tireless motor vehicle travelers, with the first McDonald's being established in San Bernardino, CA in 1940, after having moved from its previous Airdrome location on Huntington Drive Route 66...

As I've only been on one tiny sliver 'O Route 66, when years ago traveling with Snobyrd MJ' to Arizona and stopping in Kingman, AZ to take a "Goofy" picture at a "Cardboard Cutout" picture taking spot honouring 'Awntie Harriet's relative Andy Divine, appropriately located somewheres' upon Andy Divine Boulevard...

And Mary Ellen enjoyed purusing the various Station wagon's on display, ALONG WITH recounting past family outings in various Ford version's to 'N from California.

Shortly after passing thru the Route 66 exhibit, which has since become a Historic Highway Route, Mary Ellen read to me another automobile I've never heard of before, this being a 1936 Ford Model 68, which I believe Mary Ellen said she liked I-T allot...

Making our ascent topside, following the Route 66 display and the new to Mwah Ford Model 68, we passed thru the 'RASSCAR section, which initially Mary Ellen said "G-O FAST!" through this section? As we really didn't pay much Attenzione to the few "Taxicab's" on display.

Although I knew briefly that Moonshine Runners had evolved into top flight NASCAR drivers, most prominent being who I'd always simply known as Junior Johnson, I was most chagrined by another fellow Moonshiner named "Rapid Roy" or "Wreckless Roy" Hall, ironically typing this at the very same time that the Charlotte All Star "Taxicab" race was occurring.

Two of the early "Pre" NASCAR racing drivers I'd never heard of before hailed from good 'Ol Dawsonville, GA, preceding some driver from Thar' known as "Awesome Bill from Dawsonville!" (Bill Elliot) With the two unknown "Trippers" being cousins "Rapid Roy" Hall and "Lightning" Lloyd Seay who drove for prominent liquor boss Raymond Parks, who both were related to.

Roy Hall was described as one of the best NASCAR drivers ever and reputedly his defeating of "B-I-G'" Bill France on the sands of Daytona Beach prompted the founder of NASCAR to hang up his helmet and focus upon promoting instead.

Hall was crowned the NASCAR champion in 1939, 1941 and 1945, before doing a three-year stint in the Slammer' (prison) for a $30,000 Bank robbery! Meanwhile cousin "Lightning" Lloyd, thought to be the most gifted natural driver Bill France had ever seen, met even a crueler fate when he was shot by another relative over a family dispute over sugar in regards to their Moon shining activities in '41!

As both drivers made their professional Stock Car debuts at nearby Atlanta's Lakewood Speedway, where Indy 500 driver and team owner Lou Moore perished in 1956 from an apparent heart attack whilst at the racetrack...

Robert Glen "Junior" Johnson Jr. who was voted into the NASCAR Hall of Fame's initial class of 2010, having won 50-races as a driver, along with six championships with Cale Yarborough and Darrel 'DW "Boogity-boogity-Boogity" Waltrip, for which I  remember the latter driving  for Junior in the #11 Budweiser car, while having NO idea that Junior had gone to prison for a year for having an illegal still, which isn't hard to imagine since his father was a Bootlegger who reportedly spent twenty years of his life in prison! Nor did I know that the good 'Ol "Ronnie," i.e.; Ronald Reagan pardoned Junior Johnson in 1986...