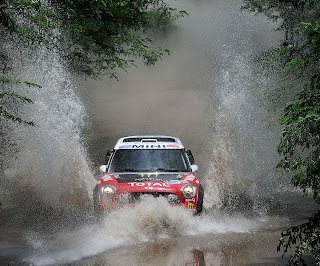 So late last year, as I was scramblin’ to ‘Ketsup on stories for Y’all, I suddenly wundered ‘bout the fast approaching 2012 ... Which has become intrinsically MORE difficult to obtain information upon, ever since motorsport.com irrevibaclly GOOBERED their website; GGRRRRRRRRRRRRRR!!!! Why did you haveda make it ALL DARK, Err black and INVISIBLE for a visually impaired ‘Vurd Botcherer to SEE??? But I digress, as motorsport.com - Here’s Your Sign!
Thus, obviously I was completely surprised to discover that Volkswagen has left the party - forsaking its all conquering Touareg
in favour of its next Motorsports challenge, the 2013 World Rally Championship... as Volkswagen AG takes the season off whilst preparing its 2013 WRC Challenger, the Polo WRC R.
Therefore, VW’s squadron of Rally Raid drivers: reigning Champion Nasser Al Attiyah, Carlos Sainz, (2010 Champion) Giniel De Villiers (2009 Champion) and Mark Miller all found themselves without drives for this year’s 33rd DAKAR Challenge.
Thus I was even more surprised to discover that defending DAKAR Cars Champion Nasser Al Attiyah has now aligned himself with Robby ‘Dirtman Gordon’s Hummer H3 team. Hmm? Does this mean that Gordon will become Al Attiyah’s “Domesteak;” Uhm, “Water Carrier? Or will Robby simply drive by and NOT see his teammate a la Elisio Salazar if breaks down?
Recall that “Greasy ‘Ol ‘Salad-bar” managed to NOT notice ‘Gourdoon’s stranded HumDinger last year - which led to Gordon being DQ’ed (Disqualified) from the event!
2011 Notes: Stage 4
And with VW’s departure, the Cars category is seemingly wide open, with Al Attiyah vs. The Desert Fox, aka Stéphane Peterhansel; who’ll be spearheading BMW’s Mini 4WD Armada.
As will try defending his title in the Two-wheel Drive Hummer, while last year’s runner-up and ex teammate De Villiers is campaigning a brand new Toyota Hilux pick-up truck.
SPEED FREAKS: Robby Gordon interview
Meanwhile another ‘Yank, whom I believe is a newcomer to the Dakar, Mark McMillan will try his luck with the brand new Hemi-powered Jeep Grand Cherokee - with all of the other Usual Suspects, i.e.; Mister Bitchies, Toyota FJ’s, RAV-4 and Land Cruisers. With Nissan Pathfinders, Volkswagen somethings, BMW X-3’s  and various Buggies all clammering to win the title and claim the Champions No. 300 plate for 2013...
Once again the ‘Scooters (Bikes) category appears to be another “Rubber-match” between perinial Dakar Stalharts Marc Coma and Cyril Despres; both competing on the ‘Uber Dominant KTM’s - the KTM 450cc (4-stroke) Rally-bikes. (With all Motorcycles being relegated to 450cc maximum displacement beginning with the 2011 ...)
As ’s defending Dakar Bikes Champion Coma hopes to repeat as winner over his continuous rival Despres of France, with these two riders sporting the number one & two plates respectively.
Yet once again I’ll be rootin’ for my Homeboy Jonah Street from sleepy ‘lil ellensberg, WA once again riding his ‘YamaHopper (Yamaha) 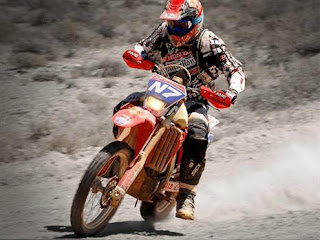 Meanwhile Sophomore Dakar Bikes competitor Quinn “Commander” Cody will once again be campaigning a Honda CFR450X, as Cody actually finished ahead of Street in his inaugural Dakar last year, although Street did notch another stage victory during his up ‘N down 2011 challenge.
Look for Quinn Cody on the No. 9 Honda, With

Jonah Street aboard the No 19 Yamaha YZ450...
GOOD LUCK BOYZ!
And Versus; Err NbC Sports Channel or whatever they’re calling ‘Dem-selves now... Will once again be hosting half-hour vinette’s with Robby ‘Purple Floyd as the Narrator. While I’d enjoy seeing Eurosport’s Gernot Bauer back on the ground; as Messer Bauer steadily grew upon Mwah last year... BUTT!  I could seriously do without Missy Chee WOW wah - Ines “Cha-Cha”Sainz; who Y’all DON’T think was hired for her personality? Ariva-Ariva-Ariva... Hmm? Perhaps something to due more with perkiness, eh? After all, remember what Danicker sez: When U Peak, you WIN!
2012 Entry List
Posted by Tomaso at 9:56 AM