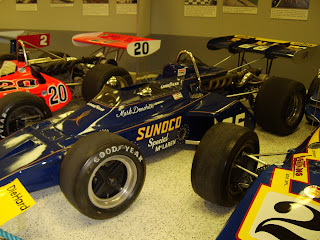 Recently, Roger Penske scored his 300th major motor racing victory at the Milwaukee mile, at the hands of new hire Ryan “Disco Inferno” Briscoe, which was also the 30th Anniversary of perennial Penske Racing driver Rick Mears maiden Indy Car victory… And as I’ve been painstakingly researching the McLaren Indy Car odyssey, for a pet project of mine, I thought the above accomplishment was a nice tie-in to the following story…
1970
Model: M15A
The McLaren M15 was born out of the frustrations that Bruce McLaren and Denny Hulme experienced during the 1968 Indy 500, (Bruce’s one and only race) in which Bruce had been originally scheduled to compete in the stillborn Shelby American turbine Indy Car project… Having been scrapped prior to that year’s running of Indy, while Denny had originally been slated to drive a Lotus turbine chassis before both drivers switched to Eagle chassis instead, while Interestingly the Shelby turbine car would serve as a show car for Paul Newman’s movie Winning.

A prototype and two race cars were built for the ’70 Indianapolis 500, with drivers Hulme and Chris Amon originally scheduled to drive, but Denny was forced to miss the event after being burnt in a fire, while practicing, as a fuel filler cap unexpectedly opened at speed as the “Kiwi” noticed droplets of fuel spewing onto his windscreen like rainfall and when he attempted to slow down, fuel surged onto the red hot turbocharger and immediately ignited the flameless methanol at 180mph!

Every time Denny stomped the brakes, more fuel gushed out of the open fuel petcock, as Hulme’s hands were searing hot… Finally at 70mph Hulme decided it was time to jump from the stricken McLaren, which was now fully engulfed in flames, hoping to clear the rear wheels during his exit! Hulme suffered severe burns to his hands and there were even whispers of possible loss of fingers, as obviously the Kiwi would be out of action for awhile… In the meantime, Denny’s teammate Amon was unable to get up to sufficient speed, thus Peter revson and relative unknown Carl Williams were drafted into duty.

The M15 was designed by Gordon Coppuck and powered by the ubiquitous 2.65 liter Offenhauser “Offy” inline four cylinder turbocharged motor. With its single Garret turbocharger and Hillborn fuel injection, the Offy developed 650bhp. This venerable lump was so antiquated that some members of McLaren were tempted to write where the British chassis met American motor; “1970 ENDS HERE!”

McLaren focused upon that year’s three long distance events; Indy, Ontario and Pocono, with two newer M15A’s being built; with Peter Revson qualifying 2nd at Ontario, while the older M15’s were sold to Gordon Johncock, which I’m assuming was the chassis he used in the following year’s Indy 500.


1971Model: M16A
Roger Penske and Mark Donohue flew to England in search of potential Can Am machinery to purchase and upon their visit to the McLaren workshop at Colinbrook immediately wished to purchase a McLaren M16 Indy Car, with Penske saying; “Build me one.”

The prototype would eventually become Donohues Sunoco liveried mount, engineered by Don Cox, while McLaren’s “Works” entries would be later chassis sprayed in the traditional papaya colours of McLaren’s Can Am cars and sponsored by Gulf Oil.

The Offy produced 700bhp and was transferred to the rear wheels via a Hewland LP500 three speed gearbox, eschewing the traditional two speed unit.

The M16’s “Wedge” shape was inspired from the then all conquering Lotus 72 Formula 1 car… And as an interesting side note; cornering speeds at Indy were 60mph SLOWER… In the early 1970’s (210/150mph) pre-ground effects era.

During Indy tire testing in March, Donohue ran a staggering 181mph while the Works entries struggled to keep pace and Penske instructed Donohue to share information with Teddy Mayer in order to not make their supplier mad, noting it was a long term deal which would pay off in the future. During Indy qualifying Donohue was on pole at 177mph but had honestly told Mayer why he was so slow and during his Pole Winner’s interview the crowd roared to life as Revson snatched it away with a top speed of 178.690mph and would finish second in the race, while Donohue and Hulme both retired.

Donohue’s stricken car was totally demolished in a later accident by Mike Mosley and the tub was salvaged, with a new car being built back in England in time for the inaugural Pocono 500 that July, where not only would Donohue start from pole, but win Penske’s very first USAC event in his team’s and sponsor Sun Oil (Sunoco) home state. Donohue would win again at the next race at Michigan, along with another pole at Ontario in September, but ran out of fuel after missing his pit signals.


1972Model: M16B
For 1972 McLaren made minor revisions to its chassis, with new front and rear wings, along with a bullet shaped induction fairing, as once again Penske ordered chassis from McLaren, this time two cars, one for Donohue and one for new recruit Gary Bettenhausen. While Penske would contest the entire USAC calendar, once again the factory concentrated on the 500 mile events, with Gordon Johncock replacing Carl Williams at McLaren.

And although Donohue was once again out qualified by Revson at Indy, this time Penske had opted to utilize a slightly less boosted Offy and when leader Jerry Grant made an unexpected pit stop with 13 laps remaining, Donohue swept into the lead and went on to win the first of Penske’s record 14 Indy 500 victories, after only his (and Penske’s) third attempt.

Gary’s brother Merle was seriously injured in a Kingfish (McLaren knock off) and lost his right arm in the accident at Michigan International Speedway, while Gary’s younger brother Tony, who also raced at the Speedway would later lose his life in a plane crash.


1973Model: M16C
McLaren built six new chassis this season, with the new model receiving mostly cosmetic updates aimed at improving airflow, as aerodynamics were slowly evolving. Teddy Mayer hired Johnny Rutherford to replace Johncock, who rewarded the team with pole position at Indy, but the race would be diabolical with rain postponements and Swede Savage losing his life before ironically “Gordy” Johncock would take the checquered flag aboard a Pat Patrick Eagle.

Meanwhile, defending Indy 500 champion Mark Donohue was contesting a limited USAC season aboard a customer Dan Gurney Eagle, with less then encouraging results, while teammate Gary Bettenhausen broke his arm in a Sprint race following Indy and Roger Penske offered the drive to some chap named David Hobbs, but the Englishman was unable to accept due to sponsorship conflicts and relative unknown Mike Hiss would subsequently fill-in.

Rutherford would win twice at Ontario and Michigan, while Bettenhausen would win at Texas, but at the end of the season Gulf Oil withdrew its sponsorship of the Works team, while Mark Donohue would retire from racing, immediately being officially named to his previous role the past seven years at Penske; President of Penske Racing...