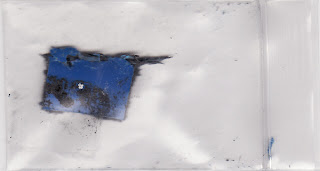 As Y’all may know by now… I’m NOT a huge fan ‘O Princess Danicker’s… And while she may be the most popular driver in Indy Car, with Milka Duno potentially being the Hottest, by far the MOST WAY COOLEST! Is none other then Sarah Fisher.

As I was totally flabbergasted to receive a hand written Thank You card in the mail from Sarah just the other day… Holding the car to open it, I noticed there was a small bulge in the envelope… HMM? Wonder what that could be as I opened the card. Then there was a very nice personalized note from Sarah saying how she’d hoped to have an excellent month at Indy this year, but obviously things didn’t turn out quite so well and enclosed was a piece of her racecar which we all recall was heavily damaged when collecting a spinning Tony Kanaan… Along with Sarah saying she hoped to see me at Kentucky.

That just really made my day! As I was bowled over by this gesture on Sarah’s part! I mean C’mon; would Dan-Dan-Danicker ever do such a thing for me?

YOU ROCK SARAH!
Only wish I could afford the price ‘O petrol to go to the Blue Grass state… Good Luck in Kentucky!
Posted by Tomaso at 9:23 AM