AUTOS: My Other Ride Is, Uhm'' 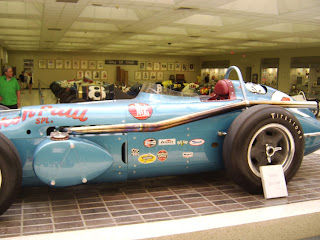 With liberal Financing incentives offered by a past Indianapolis 500 Champion...

As how many of Y'all know 'bout the 1960 Indianapolis 500 Winner's second career? When Jim Rathmann, then the owner of a Cadillac & Chevrolet Dealership in Melbourne, Florida, near Cape Canaveral, Not Bloody Oz' Mates!

Very astutely convinced General Motors to "lease" Corvettes to fellow Astronauts for the absurdly low price of One George Washington ($1.00) per year!

As it was Mercury Seven and Apollo Astronaut Alan B. Sheppard who initially got the Spacemen racing round Florida in Corvette's, with Rathmann's Chevy Dealership providing brand new rides up to Apollo 15, before NASA cancelled this unique arrangement.

Having learned about this when recently perusing my NFB Newsline for The Blind's Telephone Service's access to the June 2019 issue of Air & Space Magazine. ARSE-Sumedly' revolving round some 'lil 'Ol Anniversary occuring shortly; Hmm?

My Other Ride is a Spaceship

And while Rathmann is best known for winning at Indy in 1960 in an epic Duel with Rodger Ward, with the astounding record of then 29 lead changes. How many know that Rathmann also triumphed at Monza, Italy's very short lived Two Worlds Races, circa 1957-58, Which I scribbled 'bout previously here on No Fenders.

While my original Rathmann obituary here in Nofendersville circa 2011 is now out of date, since it utilized an old Robin Miller article from that Defunct entity simply known as Speed. So I'll leave Yuhs with another Obituary still accessible on Zed Internetz' instead.

(Photo c/o No Fenders ‘Offical Photographer CARPETS')
Posted by Tomaso at 11:11 AM