Hold your Prancing Ponies! Imagine driving cross country without a cell phone and not knowing whether or not the very first major International sporting event in Thy good 'Ol U.S. 'O Americre' would be held? But the Show MUST G-O ON! Right Uncle Bernaughty?

VIDEO: Show Must Go On

Like I said, it's definitely A-L-L a 'Wee bit foggy now... But Kudos to Tacoma Bureau Chief Mary Ellen for not only making I-T happen, but getting me into Indianapolis Motor Speedway minutes prior to the track going green for Friday morning's FP1 (Free Practice) session!

After having paid someone $20, or was it $10? To park in their front lawn for the day much to Mary Ellen's wonderful Hoond Sarah's dismay. As know Mary Ellen said we AIN'T paying $40? Uhm think we paid twenty Smackeroos' the first day.

Years later, Mary Ellen told me how Sarah forever refused to willingly get into 'Ol Blue, her trusty Ford Econoliner Campervan after our trip. Having apparently been scarred for life over our having made her stay alone in the van for multiple hours that weekend...

As Mary Ellen proclaimed to me later on Friday, parking is FREE in the IMS infield beginning at 6AM, and we're gonna be there at 6AM SHARP tomorrow! Which is exactly what we did the next two mornings. Going back to sleep immediately after parking.

As I still marvel 15yrs later over how FREAKIN' kOOL I-T WAS! Mary Ellen cooking me Flapjacks inside Mother Speedway for breakfast both days... As somehow I'm guessin' Y'all couldn't pull that off today during the Indy 500, eh?

Whilst we were totally oblivious to those world famous Tendrloins! Y'all know the ones Geo. Phillips dutifully tracks down each Month 'O May! As I've only ever had one 'O these delectable morsels Wayback in '06 when Claudio' said: You're gonna pay $9 for a sandwich? 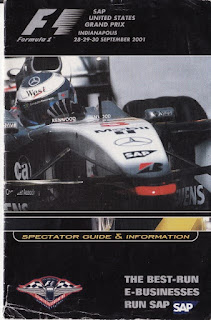 It's even funnier how I really don't remember very much of the race itself, after having traipsed round the planet to witness multiple Grands Prix in six countries over the past three decades. Although I do recall Mary Ellen being somewhat surprised over my joyous reaction over "Mika-the-Finn" (Hakkinen) being victorious!

Alas as typical here in Nofendersville, I'll just share some of my remaining memories on arguably the best Roadtrip ever!

In what's probably a pretty typical reaction? I Still vividly recall being Dumbfounded over how FREAKIN' LOOOOOO-NGGGGGGGGGGG the racetrack was! As I can still see row after row of shiny silver grandstand seats stretching as far as Thy eyes could see!

Think it musta been the front straightaway looking towards Turn 1? Since I recall the seats gently curving to my left with the wailing staccato shrieking snarl of 3.0-litre normally aspirated V-10 lump' racecars screaming towards us!

I also recall thinking how strange it was that the concrete we walked 'N walked upon to find entrance to the grandstands was cracked, uneven and expansive.

While it also seems to Mwah? Although I've experienced the phenomenon worldwide. There were multiple air-horns blasting every time la Scuderia streaked by. Since after all, these were the days of Herr Schumacher cementing his reign as 'DER TERMINATOR, en route to five consecutive F1 world championships for Scuderia Ferrari.

As Michael had just broken the record of most F1 victories by winning the Belgian GP earlier that summer, where he scored his 52nd Grands Prix victory to overtake Alain Prost's then record of 51-wins...

And after accidentally finding the FP1 (Free Practice) results on thou Intrawoods', which apparently M. Schumacher led, NO idea how I finally found the webpage below, spending over an hour trying to find it whilst makin' my head HURT; SHEISA!

As interestingly, three drivers who remain today in Formula 1 were participating in that year's event. With 21yr old British Playboy 'JENSE, nee Jenson Button in his sophomore season and initial campaign for Benetton alongside Giancarlo Fisichella.

As "Fredrico Suave" would replace Button at Benetton, which became Renault which he won the 2005-06 titles for during its second iteration as an F1 Constructor.

And then there was that Ultra cool Fresh Face rookie Wunderkind, thee original " Iceman!" Whom 'Ol Hobbo (David Hobbs) used to delight in mentioning how large his attachments were! Or simply known today as the Kimster', nee Kimi Raikkonen driving the Sauber C20 alongside the once "Quick Nick" Heidfeld, the year that Peter Sauber spurned title sponsor (Red Bull) Deeter Majestik's chosen one, the long forgotten Enrique Bernoldi; Chirp-Chirp, Bueller?

As Kimi and his Oomphlats would become Ferrari's latest Formula 1 world champion in '07, which Ferrari will mark a decade of trying to repeat next year after wallowing in the frustration of this season.

And then presumably we made our way back thru the nearby parking lot across the street. As still recall being Bamboozled over how rundown, decrepit and mangy looking the adjoining neighborhood was. As seem to recall derelict Trailer homes abounding the area.

As not sure which day we spotted that now iconic Pissing Calvin deckle', nee the ubiquitous Calvin & Hobbs cartoon character (decal) peeing upon Somme-thun', as this one gave me great relief, as it was peeing on the #24 of Jeffry Pretty-boy' Gordon; YEE-HAW! As the sticker was adorned on a "Shorty" School bus that had been turned into a camper, which we briefly toured whilst chatting with its owners.

After practice, it was off to our ultra luxurious Digs' for the next three days. As I'd pulled out A-L-L thee stops; Cymbol Crash please! Or should I-T be the Gong?

As we'd be spending the next three nights at the Indiana State Fairgrounds, for which cost a whopping $48 - including usage of the showers, replete with hot water; Ooh-la-lah!

To continue reading, see; RETRO: Setting the Stage forthe '01 USGP
Posted by Tomaso at 9:56 AM