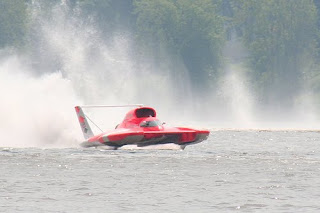 So another Seafair weekend has come ‘N gone and I suppose many cities would kill for such a fantastic event, which has come to signal the height ‘O summer here in the Pacific Northwest... As I watched the finale on the Telescreen and heard NW legend Chip Hanauer state; “The Unlimited Hydroplane race is an event in itself, the Blue Angels air show is an event by itself and we’ve got both packed into one day!”

Yeah, that’s right! It’s a wonderful tradition to have the US Navy’s Blue Angels as the highlight performers of the Seafair Regatta, preceded by a flyover by “Fat Albert” the Blue Angel’s support transport... As the event is actually the Chevrolet Cup, which I have to say good on them for honoring their commitment as GM is hemorrhaging “Greenbacks,” having just declared their third worst quarterly profit loss in their 100+ year history. ($15.5 Billion)

Hydro’s fly again
Although it’s lost quite a bit of the glamour it once held in the past, when it was the only major sporting event in town. (Pre-professional sports franchises) Nevertheless, yesterday was the annual Seafair Hydroplane regatta on the shores of Lake Washington, of which I’ve lost great interest in since the Miss Budweiser Dynasty came to a prolific end, after 41 years of domination by team Principal Bernie Little. Yet I suppose once a fan of Unlimited Hydroplanes, always a fan, eh?

Yet the names and faces of these land sharks on water or more appropriately hydrofoils, have changed immensely since the days ‘O Northwest Hydroplane lore, when beginning in 1950, the great “Slo Mo” (Slo Mo IV & V) electrified the crowds with its flying starts underneath the floating bridge on Lake Washington!

Slo Mo was followed by the Miss Thriftway, the Hawaii Kai and Miss Bardahl, with all of these famous hulls ruling the Unlimited Hydroplane roost during the late 1950’s and early ‘60’s. Then boats such as the Pride of Pay ‘N Pak, Miss Budweiser and Atlas Van Lines all fought for supremacy during the decades of the 1970’s-1990’s, although all three teams saw their leading drivers lose their lives, as Motorsports Hall of Fame Unlimited Hydroplane driver Chip Hanauer, who dreamt of being a racecar driver, instead cut his teeth aboard another Northwest staple, The Squire Shop, before getting his big break thru the tragedy of the sports “Godfather” Bill Muncey, after Bill’s death in Acapulco in 1981. Hanauer would go on to become the sports second most successful pilot behind his mentor Muncey, former owner/driver of the Atlas Van Lines, who currently holds the record for all time APBA Unlimited Hydroplane career victories, with 62 wins, while Hanauer has 61 and Dave Villwock has most likely scored his 56th.

NW Pride
Although there name may not be known to you, The Oberto name has been famous in this region for decades, not only for their long standing production of premium beef products, but also as long time sponsors of their own Unlimited Hydroplane, which was the winner of this year’s Columpia Cup.

Thus, I found the following story quite enjoyable, as apparently Art & Dorothy Oberto, (although originally Dorothy’s idea) with Dorothy humorously titling herself V.P. of Chaos, of their ‘lil “SNAZAGES” (Sausage) business, have been doing a most noteworthy thing the past few years by opening their home up to less fortunate Senior Citizens during Seafair weekend. To read the full story, see; Family opens up home to seniors

Chevrolet Cup Finals
After the days various preliminary sprint races, of three laps each, the six boat field was set for the five lap Chevrolet Cup final, being slightly delayed when the five minute “gun” was reset due to some wayward boaters upon the log boom, With all of the boats circulating and jockeying for position, the game of “Chicken” or who can go slowest was in full tilt boogey mode, with three of the Unlimited boats going off-plane while trying to outmaneuver each other for the inside lane, as current rules allow for drivers to take on water over their sponsons for a maximum of five seconds before they can be penalized.

And although the Miss Beacon Plumbing got the inside lane, Dave Villwock, former driver of the Miss Budweiser, piloted the Ellstrom E-Lam Plus to victory in the 2008 Chevrolet Cup after Jean Theoret (Miss Beacon Plumbing) was given a 1:00 minute penalty for not being on plane prior to the start of the race after leading all five laps of the final heat.

The French Canadian Theoret, who was leading last week’s Columbia Cup, before encountering mechanical problems, saw arch nemisis Villwock penalized by the race stewards for such infractions in Tri-Cities, WA and is a former two time winner of the Chevrolet Cup and was obviously disappointed by the officials ruling, which ultimately dropped him to fifth place.

Steve David, last year’s Chevrolet Cup winner finished second aboard the O Boy! Oberto while Jeff Bernard, pilot of the Formulaboats.com finished third.
Rookie unlimited driver Kip Brown was fourth driving Our Gang Racing, while Greg Hopp, driver of the Mirage boats, was sixth after being penalized a lap after hitting a buoy and J. Michael Kelly, pilot of the Graham Trucking was unable to finish...
Posted by Tomaso at 10:58 AM