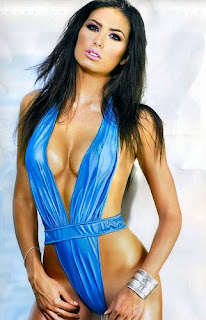 Danny B;
“When Paul McCartney wrote money can't buy me love, HE WAS WRONG…”

In the wake of last weeks horrible news regarding the death of Renault R & D Engineer William Miller, I thought a little good news was warranted for the Enstone based Formula 1 outfit, a.k.a. Renault F1.

And why yes, I know that this is a little dated… But nevertheless Indiana Bureau Chief Danny B sent me the following story about F1’s prima Donna Playboy, a.k.a. Flavour Flav (Flavio Briatore) getting married to 28 year-old Italian Super model Elisabetta Gregoraci...

Be careful Flav, Sir Maxxum may have somme-thun to say ‘bout being Top Cheese in the Playboy department, eh? Although Flavio isn’t immune to having the “Beauty’s” tripping all over him as his past includes trysts with Naomi Campbell, Adriana Volpe and Heidi Klum, whom had his daughter, Helene "Leni" Klum in May, 2004, but according to Klum; “Flav is not involved in the child's life.” Aye Karumba…

Reports claim that the newlyweds were chauffeured to and from the wedding chapel by none other than Double World Champion Fredrico Suave. (F. Alonso) Of which immediately made me flash back to when some Seven Time World Champion pulled chauffeuring duties for one of the Scuderia’s heavyweights… As in Michael Schumacher donning tuxedo and cap for Luca di Montezemolo... To which I can only say; Yo, Flavour Flay, you’r NO Luca di Montezemolo. So get over it!
Posted by Tomaso at 8:57 AM