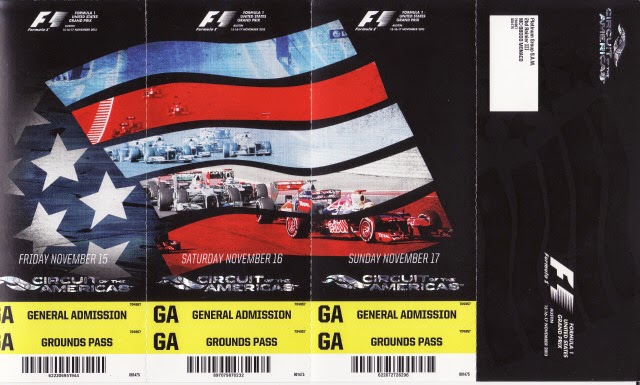 As it's funny how much the fortunes 'O "TWINKIEBOY" (Seb' Vettel) have changed in one year's time, eh? (And that was before his shock leaving Red Bull announcement!) As this time last year he was en route to tying the all-time consecutive wins tally of nine races in-a-row whilst thoroughly dominating the Austin F1 weekend...

TUES, 11/12
It was hard to believe that it was one year ago (Nov 13, 2012) when I'd forgone attending RUSH's Clockwork Angels concert at Key Arena in Seattle in order to fly to Austin, Texas instead for their debutant Formula 1 race which was a resounding success (and sell out) with 118,000+ F1 Aficionados attending, which I laboriously scribbled 'bout in;

And what seemingly has become a typical occurrence for getting anywhere at a decent time from thee Pacific Northwest, once again I was fated taking another Oh DARK 30 flight, this time departing at 7AM, with my Shuttle arriving at 4AM after having abruptly awoken at 2:45AM; SHEISA!

Upon having been safely collected by my hosts Claudio' & Nelie, and  with their friends (Larry & Karen) from North Carolina in town, we all inserted ourselves into the mighty CRV and trundled off towards Lockhart in search of the apparently world famous Black's Barbeque restaurante established in 1932, which Karen had seen multiple times upon the Travel Channel.

There we had some fine eats as in brisquet Y'all! Not to mention ribs, "Snazages" (Sausage) and beef to name just a few of their tender morsels, not to mention the plethora of side dishes... But Don't worry Y'all, there weren't NOBODY named Barrack trying to cut ahead in our buffet  line; Hooah!

After our driver Claudio had a little trouble finding our route back home, we took a brief drive around Downtown Austin to view the Capitol building, Governor Rick "Good Hair" Perry's Fortress; Err mansion, etc before returning home...

WED, 11/13
Really don't recall what all we did, although after an early morning breakfast and send off of our guests and lazing around, I think we all collapsed and went to bed early, having been sleep deprived the past two Dazes...

THURS, 11/14
Spending Thursday leisurely, I mused that evening that it was just another typical day in Austin; Hya! First having been rear ended by some speedy Toyota Camry whose entire grill, front facia and hood were smashed-in upon clobbering our CRV's rear mounted spare tyre. As our heads were thrust harshly into the seatback as we were trying to pull out into traffic.

Then as we exited the 'Regal Beagle cinema where we'd gone to purchase tickets for the special screening of Clockwork Angels, Claudio said that's funny, there's a "Copper" next to our car... And upon entering our vehicle I asked Claudio if he'd rolled up my window? Then in the middle of the spacious parking lot he came to an abrupt halt and said what's this on my window? It was a note from APD (Austin Police Department) saying windows down, key in ignition; you're asking for I-T! Informing us they'd rolled up our windows; Aye Karumba!

then upon the way to the local Colver's restaurante, as our guests had informed us they've got the bestest cheese burgers & frozen custard; Somebody Give Me a cheeseburger; Hooah!

We passed  by a local climbing wall with a flotilla of Austin Fire Dept vehicles parked in front of it, as they were busy practicing their repelling techniques; Yep! Just another typical day in Austin, right? Hooah!

As I mused over this during the first of many fine dinners prepared by Nelie, while I decided to stay home and get a good nights rest instead of attending Hells Belles opening night performance of Austin's Fan Fest, which I was  glad I'd chosen to do so as Claudio returned home from their concert at 12:30AM! Making our 6:30AM wake-up call to go to the track seem exceedingly early...

Although we've now both lamented this past year how we wished  that we'd gone to check out 'Wee Willie Buxom's (Will Buxton) charity extravaganza at the Speakeasy instead! Which is on our agenda this time 'round...

(All photo's courtesy of Austin Correspondents Nelie & Claudio')
Posted by Tomaso at 9:36 AM